For all the “Camouflage People”

Sweet Daughter started drawing flag pictures around Memorial Day. We had done our best to explain how Memorial Day was to honor those people in uniform that keep us safe here in the United States. (We left out the part about honoring the ones that died. She’s four, and we figure five is old enough to introduce that buzzkill.) She remembered the “camouflage people” from our event at Petersburg in April, and she knows that there is evil in the world. In her case it takes the form of the Big, Bad Wolf in her dreams, but she understands that there are bad guys around and that special people exist to help keep her safe from them. Whether it’s a soldier, policeman or parent, some people step up when things go bad.

Her first flag picture was one of our house with a flag, and I was instructed to give it to a “Camouflage Person”. I tucked it away to put in the “forever box”, but I got busted. We were in line at the grocery store when she noticed a gentleman in uniform behind us.

“Momma! A camouflage guy! Where’s that picture I drew??”

So she went home, drew a smaller one which she folded in half and tucked it in my purse with a reminder to give it to the next CP I saw. I carried it around for a week or so when I ran to the grocery store to pick up a few last-minute items for our trip to Williamsburg. The parking lot was mostly empty -- except for the car parked way over to the side with the guy in ACUs rummaging around in his very large, very full camouflage bag in the trunk.

Crap. I was hoping SD would be with me when this happened. I don’t do so well with strangers and she has no problem with them. But I promised, so I walked over, folded drawing in hand.

“Uh, my-four-year-old-daughter-drew-this-and-asked-that-I-give-it-to-the-next-person-in-uniform-that-I-saw” I stammered as I kind of pushed the paper towards him. I felt like I was interrupting something.

He very politely opened it, looked at it, and soberly said “thank you, ma’am” before folding it back up and stuffing it in his bag.

I managed to blurt out, “No, thank you” before turning tail and hurrying into the store while wiping tears off of my face. I felt as though I’d made him feel worse, and I felt selfish, and small. 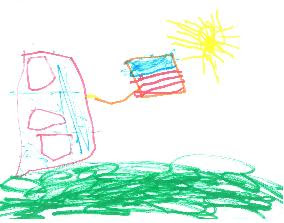 So. Here is the first picture that I was instructed to give to a Camouflage Person. I’m posting it to share it with any CP that would be happy to have it. Know that a four-year-old girl and her parents are praying for you, and that we're really glad you're keeping us safe.
Posted by Nancy R. at 9:28 PM