My buddy, Michael W., recently presented me with a belated birthday present. It was well worth the wait.

Doesn’t every girl want her very own plug bayonet? What? You say you can count the number of women you know who own matchlocks on one hand? Pity.


You may remember this knife that he made forJayG. Isn't that beautiful? He also made my bandolier (and the bottles, and the horn).
Pictures do not do this scabbard and bayonet justice. The scabbard was dyed is what is becoming my "trademark" dark chocolate brown. The blade has been browned as well. If I had included pictures of the matchlock as well (must remedy that), you'd see that the gun is nothing fancy. It's a pipe on at stick. It's ugly. It's beat up. This bayonet, while not flashy, shows an elegance of form and function. 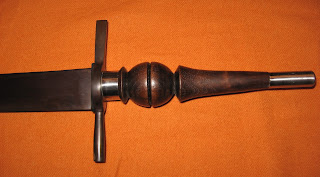 It is truly like casting pearls before swine.
Posted by Nancy R. at 9:24 PM 10 comments:

I’m sure this is considered blasphemy by many BBQ purists, but I had some boneless, skinless chicken I needed to use up, so I threw it in a crockpot and covered it with chicken broth and let it do its thing. When it was done, I removed the chicken and pulled it into shreds. I added a Memphis-style barbeque sauce, put it on a bun, and topped it with a slaw made with cabbage, shredded apple, raisins and some mayo.
Yeah. I think I’ll be making that again.
Posted by Nancy R. at 9:09 PM 12 comments:

This is Sweet Daughter's second shot with her new rifle. She cranked off the first one with nary a flinch before I could press the "go" button on the camera.
Posted by Nancy R. at 4:24 PM 8 comments:

Sweet Daughter finally got a chance to fire her birthday present today. She hasn't done any shooting in months, but it was time to try out her new .22. 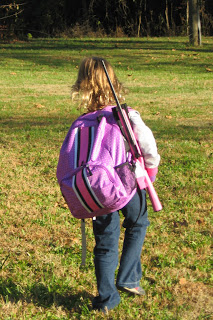 Her first target selection was the Big Bad Wolf. Shorter Half instructed her on the basics and she was good to go.

[Video to come if it will EVER load ... UPDATED - Video on following post.]

The bi-pod made all the difference for this new shooter. SD was able to hit what she was aiming at. The wolf target took a beating. 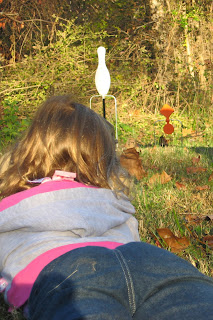 Then we set her loose on some reactive targets. See the orange spinning target? She hit the diamond on her first try. Here is an action shot of the the target in mid spin. Really. 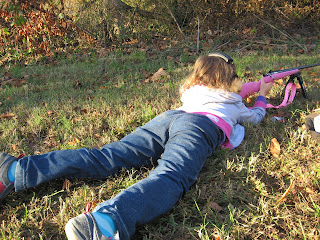 By this point, she's loading and cocking the rifle herself. 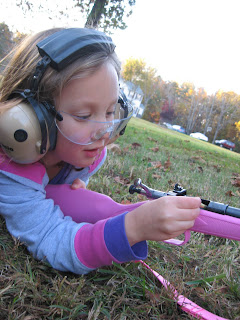 She's ready for something different. 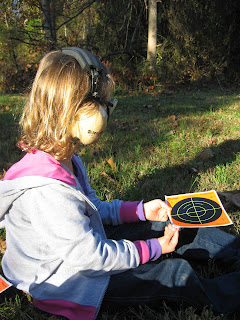 She loves the targets that change color. So while Shorter Half did some pistol work, she selected anew target and we girls did some bonding with the help of an EPR*. I didn't worry about her technique, I just made sure she stayed safe, followed the four rules, and had fun. 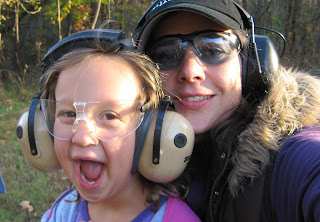 I think we were successful. This reaction was a result of this target. 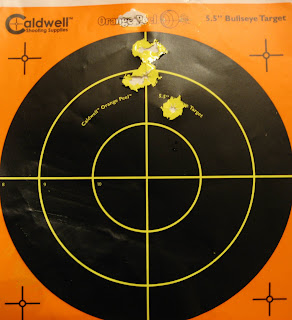 Seven shots from the prone position. Six on paper. Rifle not yet zeroed. I'd take that any day of the week.

After years of being able to knit a swatch, and then proceed with a successful project, the ability to knit something to scale continues to elude me this year. So I decided to make some mittens for Sweet Daughter for our Rev War events figuring that if there were too big she’d grow into them. Eventually. Since her gown sleeves only come down to just below her elbows, she needed something to keep her lower arms warm. We can document elbow length knitted mitts (sans fingers) and so I combined the two. I am usually loathe to “make stuff up” based on conjecture, but I’ll make an exception for some things. If elbow length mittens keep SD comfortable so she enjoys living history events, so be it. I figure it sort of makes up for the early morning hike through the dew-soaked grass to get to the porta-potties.

Oh … does anybody want to guess what this is going to be? 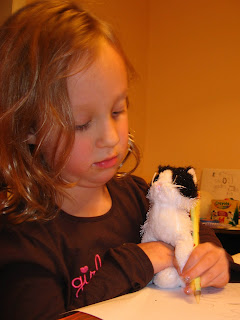 Sweet Daughter asked if she could guest blog tonight and so she wrote a story about one of her toy cats, Maggie. She asked that I please correct her spelling since she didn't want to take the time to ask how to spell all the words she didn't know. So without further ado, I present "My Favit Cat". 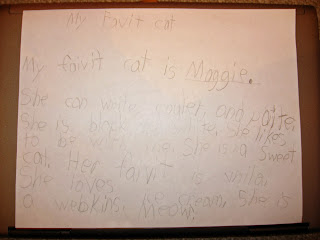 My favorite cat is Maggie. She can write , color, and paint. She is black and white**. She likes to be with me. She is a sweet cat. Her favorite is vanilla. She loves ice cream. She is a Webkinz. Meow!


* In memory of William whom I had the pleasure of meeting last spring in Pittsburgh.

** Amended after the fact to read "She is black and white with green eyes."
Posted by Nancy R. at 7:08 PM 3 comments: