I know this isn't an area of expertise for the majority who stop by here (myself included), but while poking around your local funshows, please be on the lookout for two muskets stolen from east Tennessee in mid-September.

The first is a Japanese 42” barrel reproduction Brown Bess, with black sling, repaired crack in wrist, missing side plate, and missing bayonet lug – it’s been well used for over 30 years.
The second is a 36” .62 barrel officer's fusil, with curly maple stock, black sling, and St. Andrew device in lieu of escutcheon plate, also a reproduction.

I don't know the owner of these personally, but saw the notice and thought I'd pass it along. If you have any information, please contact Paul Pace at paullaurapace@bellsouth.net.
I've requested pictures, and will post them if they are available.
Posted by Nancy R. at 10:25 PM 7 comments:

Guess who I met?

I heard that Larry Corriea was going to be at Ft. Belvoir signing books today. None of my other hoplorati friends from the area could commit to going, so Sweet Daughter and I made plans to make the trip ourselves. I planned carefully – I called to make sure a civilian could get in, I programmed my Garmin, printed out back-up directions and chose my outfit carefully.  Yes. When one is meeting a New York Times best-selling author, one wants to make an impression. You know where this is going, don’t you?
We got at the PX right at noon, and we went in. Yes, I wore the almost 6” werewolf shoes at an army post PX at lunchtime. (My inner introvert is still hiding in the closest, angsting “Why? Oh whhhhhhyyyyyyyyyyyyyyyyyy?”) I recognized Larry right away – and who was standing there but MsgtB who said something along the lines of “It’s Nancy.”
And Larry Freakin’ Corriea stood up, shook my hand and called me by name.  Larry Freakin’ Correia knew who I was – or at least remembered my name from Monster Hunter Alpha where I was red-shirted but didn’t die.  You know all the nice things people say about Larry? They’re not exaggerating. And it’s clear that he adores his family. He showed us pictures and shared stories. He signed books, he signed a red shirt for me, he took dozens of pictures. He even signed this. 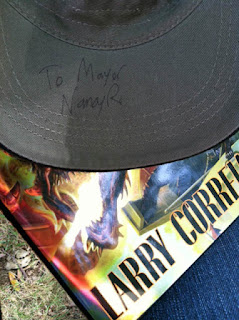 This is MsgtB’s hoplorati hat. I know that I’ll catch hell for outing him as a thoughtful and decent guy, but he had Larry sign his hat for me, as he didn’t know if I’d be able to make it  to the signing or not. Damned nice of him, even if he did mention in the very same breath that I be handing over my hoplorati  hat to him in exchange.


Sweet Daughter hung out while we adults bored her nigh unto distraction, but she was very well behaved. Larry even commented on it and mentioned that his 7-year-old would have been setting things on fire by this point. I have to admit, I was very conflicted. On one hand, I was quite proud of how SD was behaving. On the other, I had a brief moment of self-doubt as a parent. SD wasn’t setting things on fire. Was I doing something wrong? Was I neglecting her education in some way? I think this will make up for it. 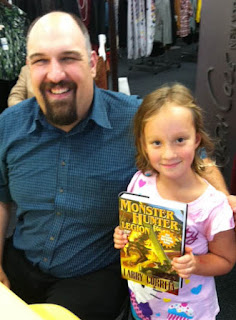 Remember the story of the partial remains of our troops being incinerated and dumped in a landfill?
On Sunday, September 23 at 4:00 in the afternoon, a plaque will be dedicated to honor the memory and sacrifice of at least 274 service members of all branches who died in combat. Sweet Daughter and I plan on being there. Let us know if we should look for you.
Posted by Nancy R. at 7:09 AM 1 comment: