In lieu of actual content while we wait for Irene to show up, I present one of the more interesting searches that have shown up in my tiny little corner of the internet: 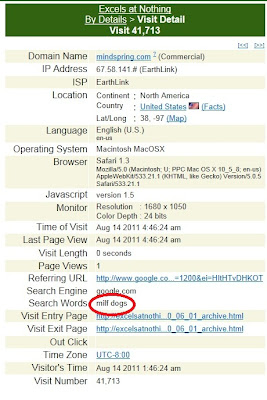 Labels: Not like other moms, Too much free time

SayUncle linked to me last Thursday and the hits started rolling in. And then I saw this, which I found hysterical. S.W.A.T. Magazine's Facebook page? Linked to me? That's like a gourmet magazine linking to my scones recipe or something. It tickled me to no end. 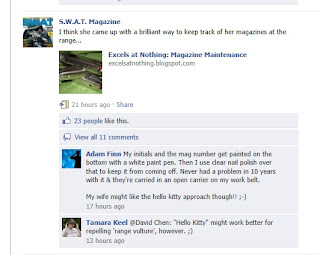 But getting black listed? That was best of all. Thanks!
Posted by Nancy R. at 5:33 PM 4 comments: 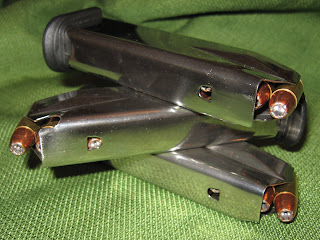 I won't go into the care a feeding of magazines here, because what do I know about it, anyway other than you need to keep the lint and dirt out of them, and clean them thoroughly from time to time? What I do know is this ... you're supposed to label them. This is so you can tells yours apart from all the rest when shooting with friends. This is so you can narrow it down in case there is one magazine that is causing problems with your firearm.
I hadn't gotten around to it because, well, I don't have that many magazines, and I knew I'd spend way too much time obsessing about some sort of obscure code that would indicate if that mag was for my defensive ammo or my plinking ammo, the date I purchased the it, etc. I'd research the best labeling method, and select the best font for readability. Basically, I was over-thinking the whole thing. Sweet Daughter solved the problem for me today. What do you think?
Posted by Nancy R. at 8:42 PM 9 comments: 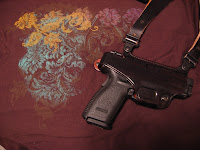 I’ve got a dark brown t-shirt that sort of blends in with the leather on my shoulder rig. It’s got a floral/leafy design on the front so it looks kind of feminine, and I wear it when I’m trying to stay low-key. I wore it to dinner out last week, and I ran into a co-worker who didn’t even notice the gun. A few days later, the nice young man behind the counter at Chick-Fil-A certainly did, saying that he wished he could carry like that.  (WIN!)


The shirt didn’t seem to help much with the low-key part when Sweet Daughter, Shorter Half and I went to the Large Sporting Goods Store last weekend and the staff commented on the shoulder rig. And all the extra ammo. Can someone please tell me what it is about shoulder rigs? I know I’m a n00b, and don’t yet get all the nuances and inside jokes, but I feel like someone stuck a sign on my back that says “HEY, LOOK! I think I’m a bad-ass! And don’t forget, I’m bristling with ammo, too!”
So much for staying low key.
Posted by Nancy R. at 9:10 PM 6 comments: 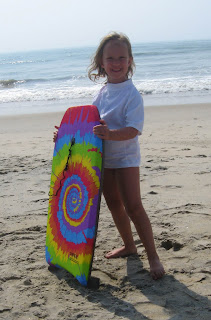 Sweet Daughter and I had the opportunity to join my sisters in Chincoteague and the end of July for a few days. The weather was beautiful. SD learned how to ride a boogie board. She watched a guy reel in not one, but three "baby' bullhead sharks (bull sharks?). That is if a two and a half foot long shark is still considered a "baby". She thought they were really cool, especially since we were swimming right by the fishing lines. The next day, she watched one of these get reeled in. 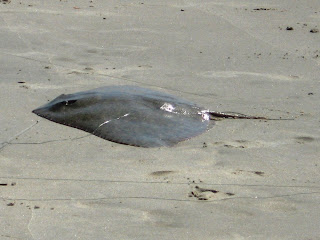 She wanted to help. I discouraged that notion. Then I noticed these beautiful little clams smaller than my little fingernail in shades of lavender and peach and pink. And I showed SD how they dug themselves back into the sand when uncovered by the tide.
And she FREAKED OUT. The shark made her laugh. The ray had her wanting to get up close and personal, but the clams had her spending the next half hour yowling about how there were some without shells and they were hurting her feet.
Adolescence is going to be fun, I can already tell.
Posted by Nancy R. at 7:34 PM 4 comments: