I’m putting together some patriotic music for Sweet Daughter, and I’m looking for some input – both for song titles and versions. For instance, I’m having a devil of a time finding an understandable vocal arrangement of the “Star Spangled Banner”. Choirs are lovely, but I’m hoping SD will learn the words. And did you know that if you put “Patriotic” in the album title, you have NO idea what you’re in for. Especially if the genre is “New Age”. 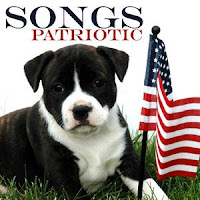 This album was titled “Songs Patriotic” and had this song listing:

Okay, even with Country Roads, I’m on board with this. Then we have:

I beg your pardon???? This was followed by:

Out of curiosity, I click to listen to a few snippets of song, and it’s freakin’ Zamphir. Okay. I don’t know if it’s really Zamfir, but those are either Pan pipes or somebody’s been slipping something into my Lucky Charms. I also came across patriotic music on bagpipes (yay!) and accordion (I kept looking for the St. Pauli girl to show up with those huge jugs mugs of beer).

Anyhow, the songs I've got on my potential list so far are:

I have a feeling this is going to morph into including a bunch of the old standards. Musical cultural literacy, so to speak.

Got any suggestions?
Posted by Nancy R. at 8:26 PM