Photo of the habit.

I was fortunate to have run into Richard Nadeau (a real photographer!) at Colonial Williamsburg. He was kind enough to take some photos of me in my riding habit. He is in the middle of a major move, but took the time to dig out a computer so he could email me this. 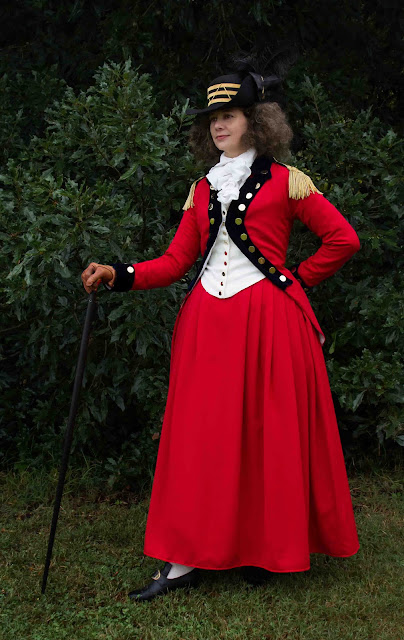 Thanks again, Richard, and if you're reading this, I hope to see you in Williamsburg again next year!

Sweet Daughter has been consumed with all things “Brave” since we saw it in the theater this summer, and she decided that’s who she wanted to be for Halloween. I’d started collecting bits and pieces before I went into hyper-drive on my riding habit, so I had the teal colored velour (thanks, eBay!) and the dark brown suede shoes (thanks, eBay!) when I decided to get down to business this week.


You see … there was a party last night and she wanted to go, so I had to get busy.


You know what the hardest part was? Deciding where I was willing to cut corners because it was JUST A COSTUME. Quit laughing. You know who you are.


Yes, I researched it. I looked at still shots of the movie. I zoomed in on the details trying to figure out what it was they were basing her gown on. (And, no, it couldn’t have been the fancy one, it had to be the “everyday” dress.) Now, medieval fashion is not in any way my strong point, but I could tell that there was some kind of dress over some sort of shirt/shift/chemise thing. But what to do for the gown? Then it occurred to me. I’d made this tunic for a co-worker this summer. What if I just cut it floor length? And made it with different sleeves? Then the shift-thing could poke out in the gaps, and hopefully look like the movie.


So, where to start? When in doubt, go with what you know, so I grabbed the Mill Farm shift directions that are included with their girl’s 18thcentury gown pattern and lengthened the sleeves so they’d fit over the bend of the elbow and still come down to the wrist and end in a 1” ruffle. I cut them sideways so the neat selvedge edge of the muslin (yes, cotton muslin. Go ahead, say it …) would act as the hem. I used bias tape for the casing for the elastic (I know, I’m still twitching from the experience), inserted the elastic, and sewed up the arm seams. I cut the body out of the remaining width of muslin and didn’t even bother to cut in an A-line. (I know, I was living dangerously at this point, and there was no looking back.) I measured the width from the point of shoulder to where I wanted the neckline to be, and everything in the middle got cut out for the neckline (2” deep in back, 3” deep in front). I added a ruffle of some pre-pleated ruffle thing found at our local Micro-Walmart (had I been thinking, I would have cut the shift 1 1/4” narrower, and used the selvedge from the other side), some more bias tape and elastic, and I had a neck casing. Add sleeve gussets, sleeves and hem, and done in 90 minutes. 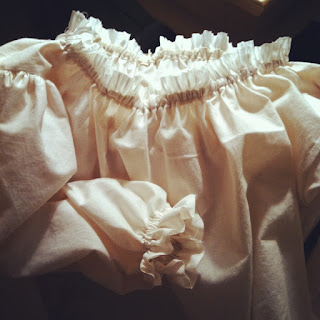 For the gown, I started with a mock-up. I measured her chest and waist, and the distance from her waist, up over her shoulder, and down her back to her … waist. I cut a piece of scrap fabric out that long and folded it in half. I added some width for ease and seam allowance, and cut an A-line shape along those measurements and sewed up the sides, leaving room for the armholes. I cut a + just big enough for her head to poke through, and tried it on over the shift. I pinned the shoulder seam, drew where the armholes should be, and marked the neckline. I also fit the sleeve pieces that were cut to her arm measurements (plus seam allowance). I marked the hem, and the shape of the upper sleeve, and then went to work on the teal velour. 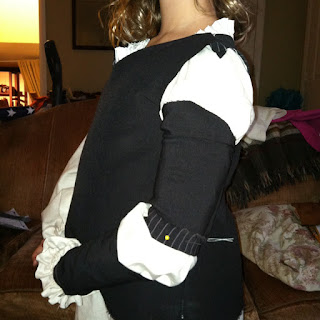 I bought two yards off of eBay – they were already cut, when meant the gown wasn’t going to be any longer than about 36”. Luckily, that was just about right so SD could run around without tripping. I cut the main panels from two rectangles of fabric, and then transferred the shaping from the mock-up. From the remaining fabric, I cut 4 triangular gores, making sure the nap on the triangles went the same way as the gown. I cut a slit up the center of the front and back rectangles, and inserted a gore in each one, and one on each side.


Then I finished the rest of the side seams, hemmed the armholes and neckline, and had SD try it on. To say she was happy with it was an understatement.

The sleeve pieces I cut without any ease, as the velour had some stretch, and I wanted them to stay in place. I sewed some 1” wide tubes out of the scraps and used those to connect the sleeves together and attached them to the gown.


A friend of SD’s had bought a Merida costume which actually came with a wig. Since the friend already had perfectly long, curly red hair, she gave SD the wig. Add leather shoes, and a bow and arrow left over from her birthday party and she was all set. 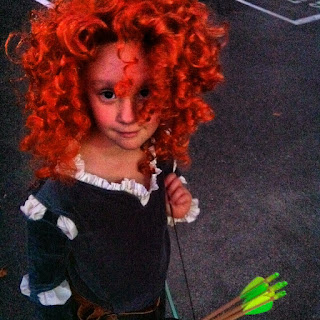 About two years ago, I got the crazy idea of making an 18th century woman’s riding habit. Not just any habit, but one based on a regimental uniform as seen worn by Lady Worsley and Mrs. John Montressor. I started collecting the bits and pieces needed, and in June I got started. I debuted it this past weekend in Williamsburg. Unfortunately, I don’t have many pictures as we’re not supposed to be seen with a camera in our hand while in 18th century clothing. I’m hoping to get more pictures, but this will have to do for now.

I did have a brief “Oh … crap” moment while on my way to the Commander’s Meeting on Saturday morning. You see, we turned our coats for “Prelude to Victory” that weekend, and were portraying Continentals and I was wearing red. Bright, screaming, lobster-back red. But you know what? Not one single person asked me why all weekend. Not only that, the Continental Guard posted on the Wythe House came to “present arms” not once, but twice when I walked by. It must have been the epaulettes. Or something. Because (1) I was a woman, and therefore could not possibly have rank, and (2) I was in a red. Even his Excellency, General Washington (and his staff) took note of me and gave a polite nod in passing. 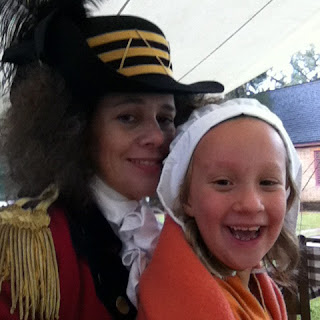 While strolling around town, I had a brief squee moment when I ran into Lauren from The American Duchess. I don’t spend as much time on the costume blogs, but I recognized her from a tutorial she did on hedgehog hairstyles. I believe I blurted out “HEY! You have a BLOG!” Classy, no? Anyhow, she looked fantastic, and was very polite as we compared notes on seaming techniques. And I seriously covet her silk stockings.