I'm finishing my second cup of coffee before heading off to Walmart to procure the groceries for the week, and then I don't plan on leaving the house other than to go to and from work. Christmas preparations are almost done - today it's just regular chores like laundry and general housekeeping.

Wishing you all peace, and a little quiet.

Ghost of a Thanksgiving Past

Some 20 years ago, I was asked coerced convinced to prepare a modern Thanksgiving dinner in an 18th century manner in the home of said coercer host.  And oh, by the way, there would be a member of the British Embassy attending with his family, among others.


I came up with a menu*. I scaled the recipes up for the number of  people I was feeding, photocopied all the recipes, and put them in a binder. I made a master shopping list. I made a list of every pan, mixing bowl and utensil that I would need for each thing I was making. I made a timeline of what needed to be started when, when it had to go on the fire, what could be made ahead of time, and what had to be done last minute. I was as prepared as humanly possible for something I had never done before. 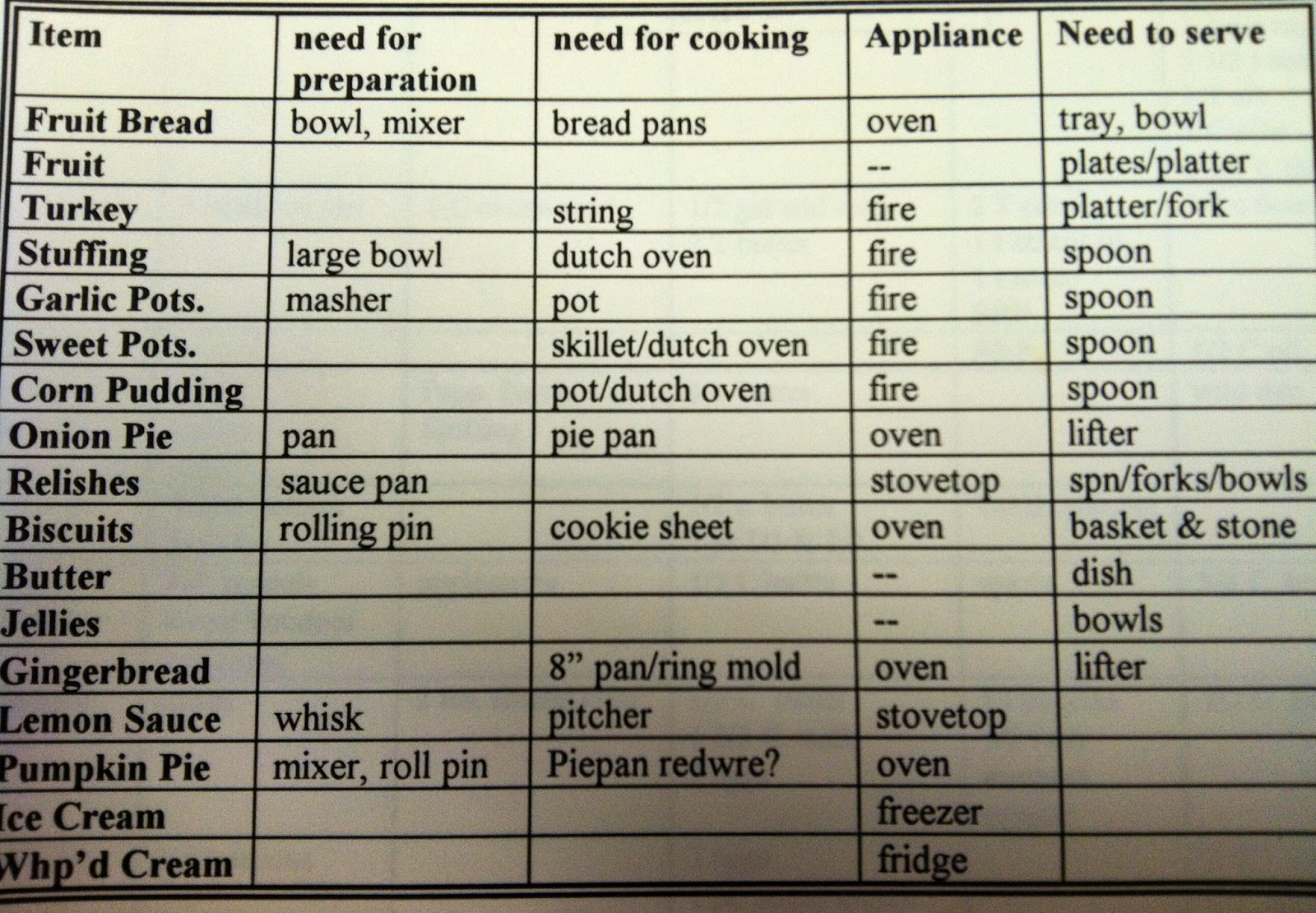 On Wednesday night, I made the cranberry sauce, and did as much food prep as I could. On Thursday morning, our host took himself to the grocery store to pick up the two fresh turkeys he has ordered previously, while I kept cooking.

He returned with two frozen turkeys.

He said they’d lost his order. The best they could do was send him back with frozen turkeys. Turkeys that were supposed to be on the fire in very short order. So I did the only thing I could think of. I named them John and Priscilla, and put them in the shower to thaw while I kept on with the meal prep.
The rest of the day was mostly a blur. I do remember that the turkey on the spit (Priscilla) cooked faster than the one hanging from the clock jack (John) so we rigged up a reflector with a sheet of something shiny.  I remember one of our guests coming in and taking pity on me and kneading the dough for the rolls. I remember the stiff upper lip when one of the Brits decided to try pumpkin pie for the first time and was very surprised that it wasn’t bad. I remember another member of the family helping with the washing up. 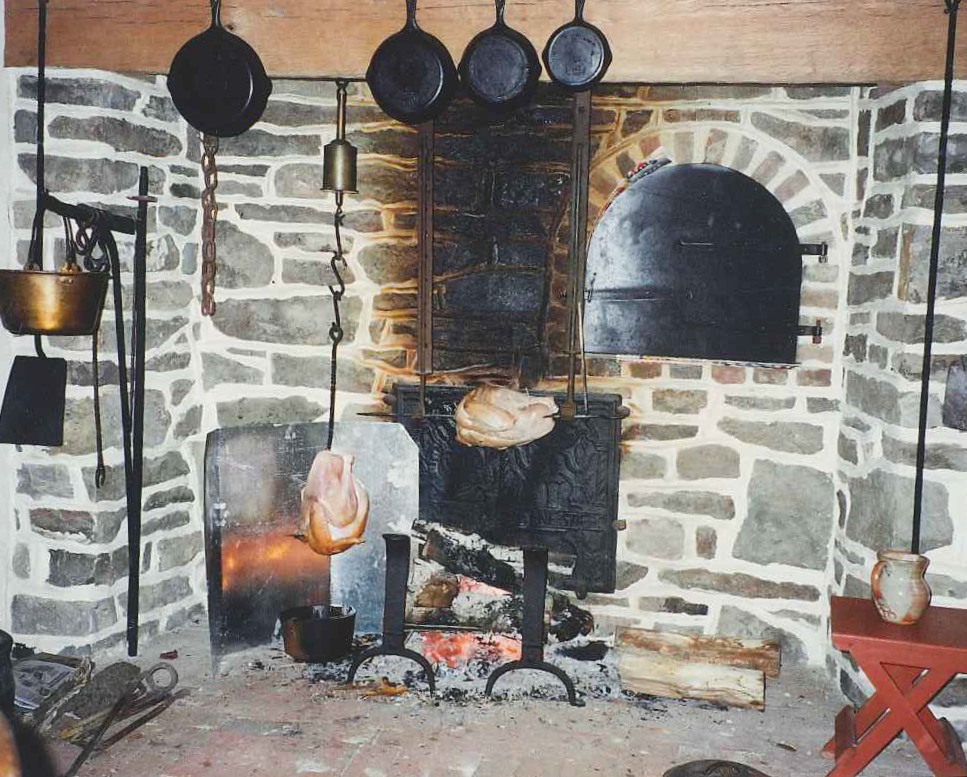 But mostly, I remember thawing John and Priscilla in the shower.

Update on The Chair

Crappy pictures in bad lighting ... but the faux Windsor chair got a couple of coats of "Salem Red" milk paint over the stain, the was lightly sanded and coated in polyurethane.

It's not something I ever would have started out to do on purpose, but I'm happy with how it turned out. The milk paint just looks right, and there is some nice depth of color. 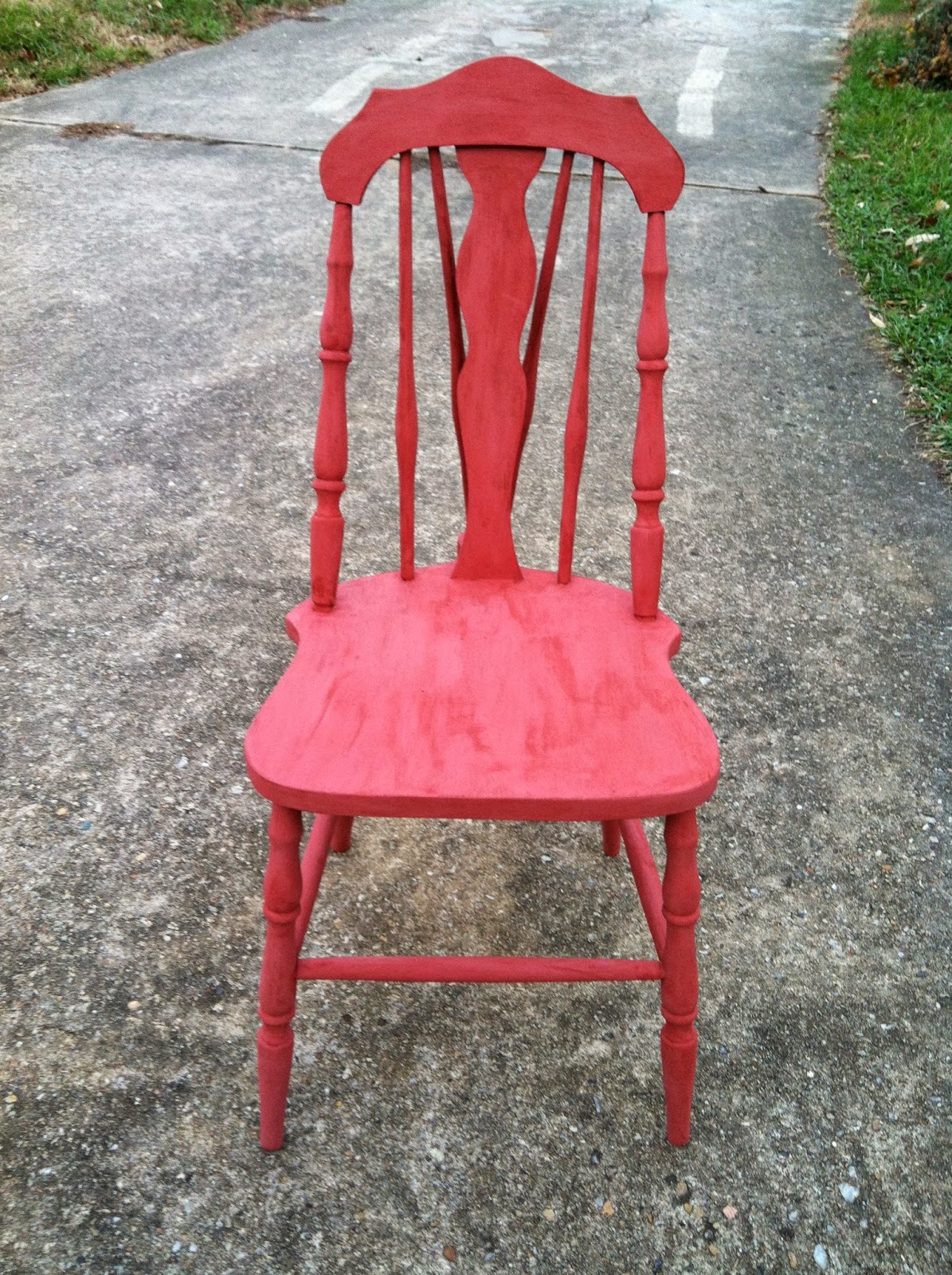 This is the milk paint. It's very flat and chalky looking.
This is with a little sanding to smooth out the paint and expose a little stain, and with a coat of poly on top. 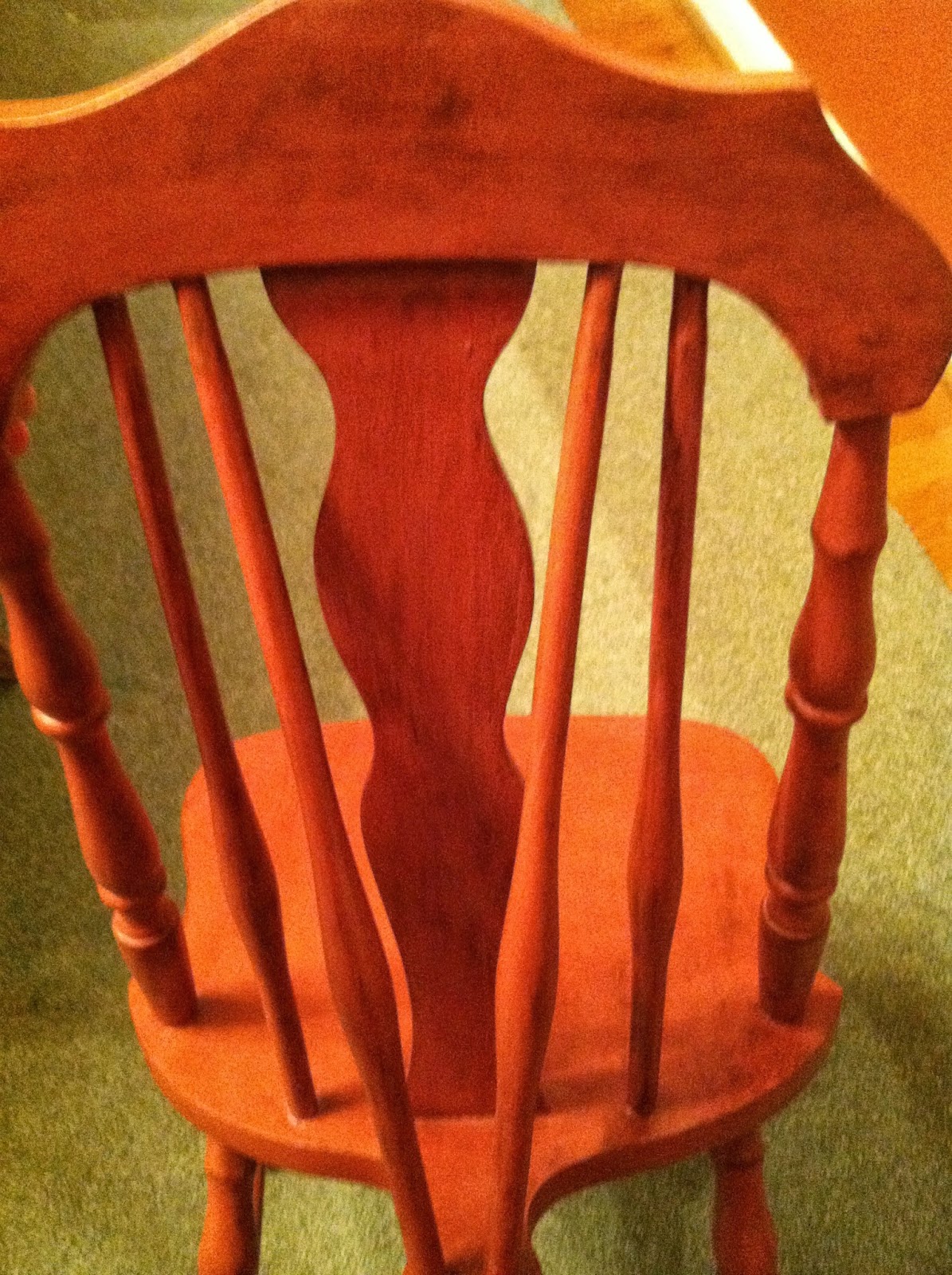 There is some nice depth of color now. A little sanding, and another layer or two of poly and we should be good to go. 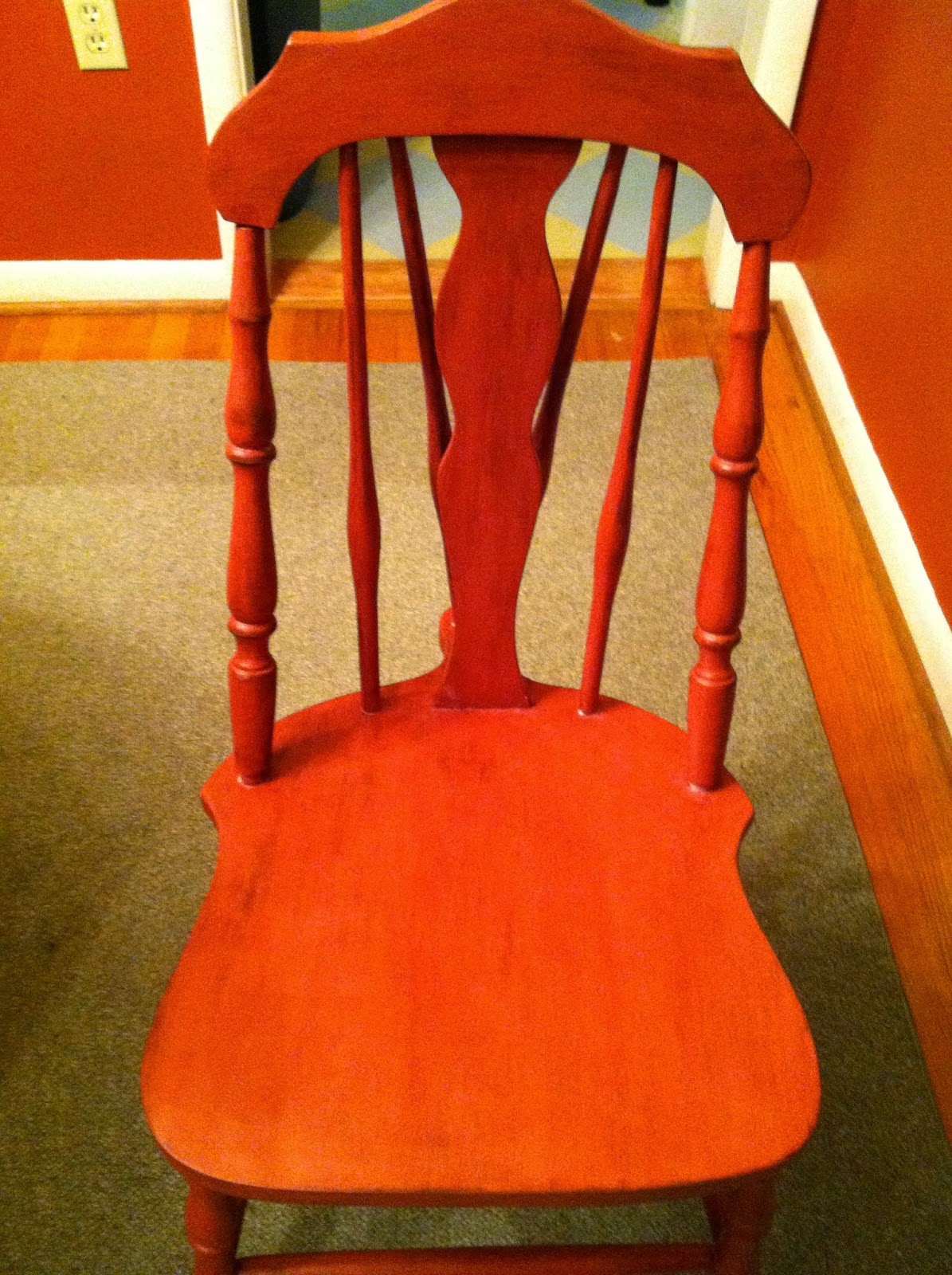 I never would have planned to refinish this chair in this manner, but it suits the style, and I'm happy with it. Sometimes (rarely ...) the mistakes have happy endings.
Posted by Nancy R. at 8:26 PM 1 comment:

Sweet Daughter's cloak is now about 95% finished. I just need to find the right ribbon for covering the neck seam so it doesn't rub. 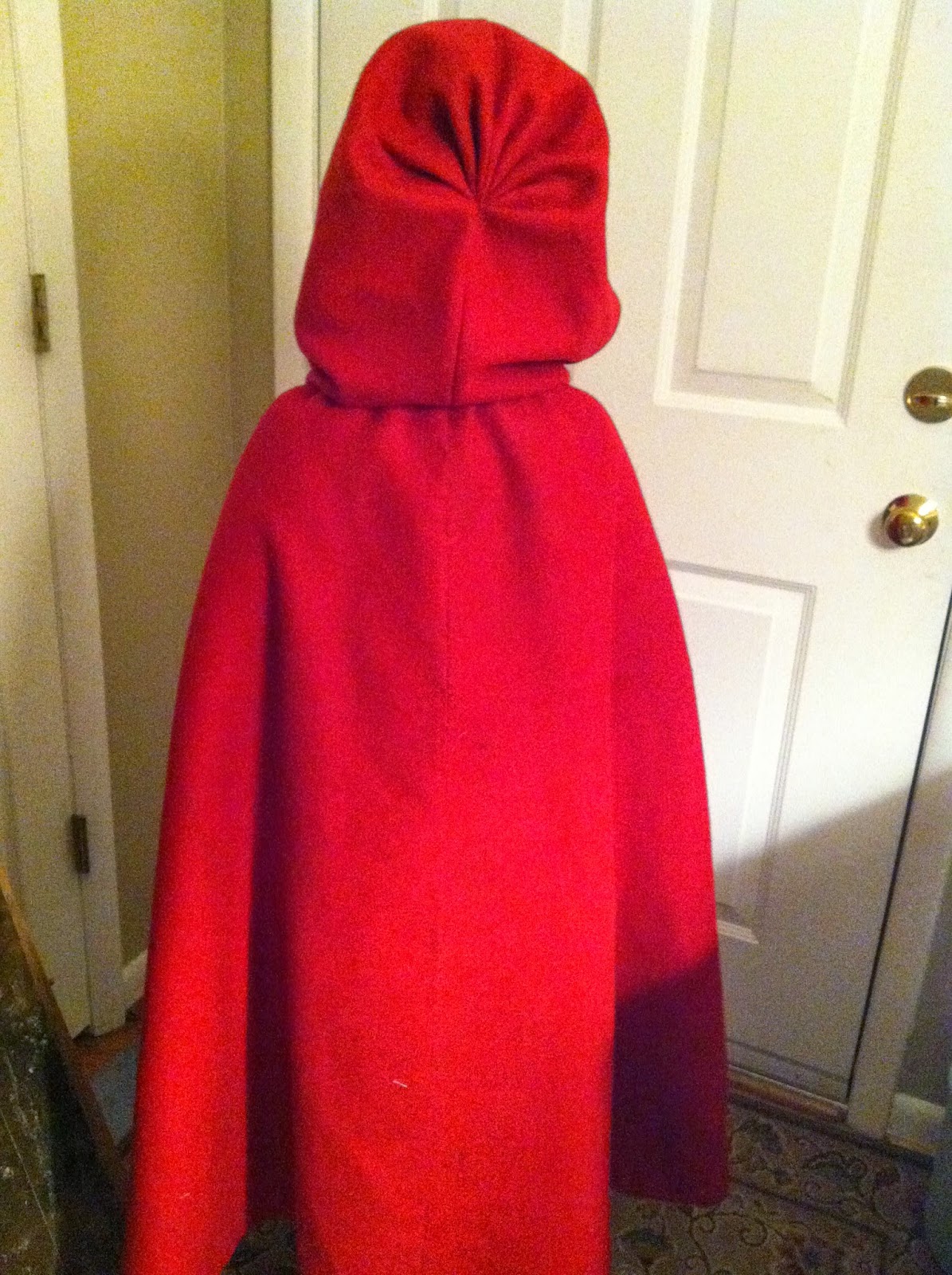 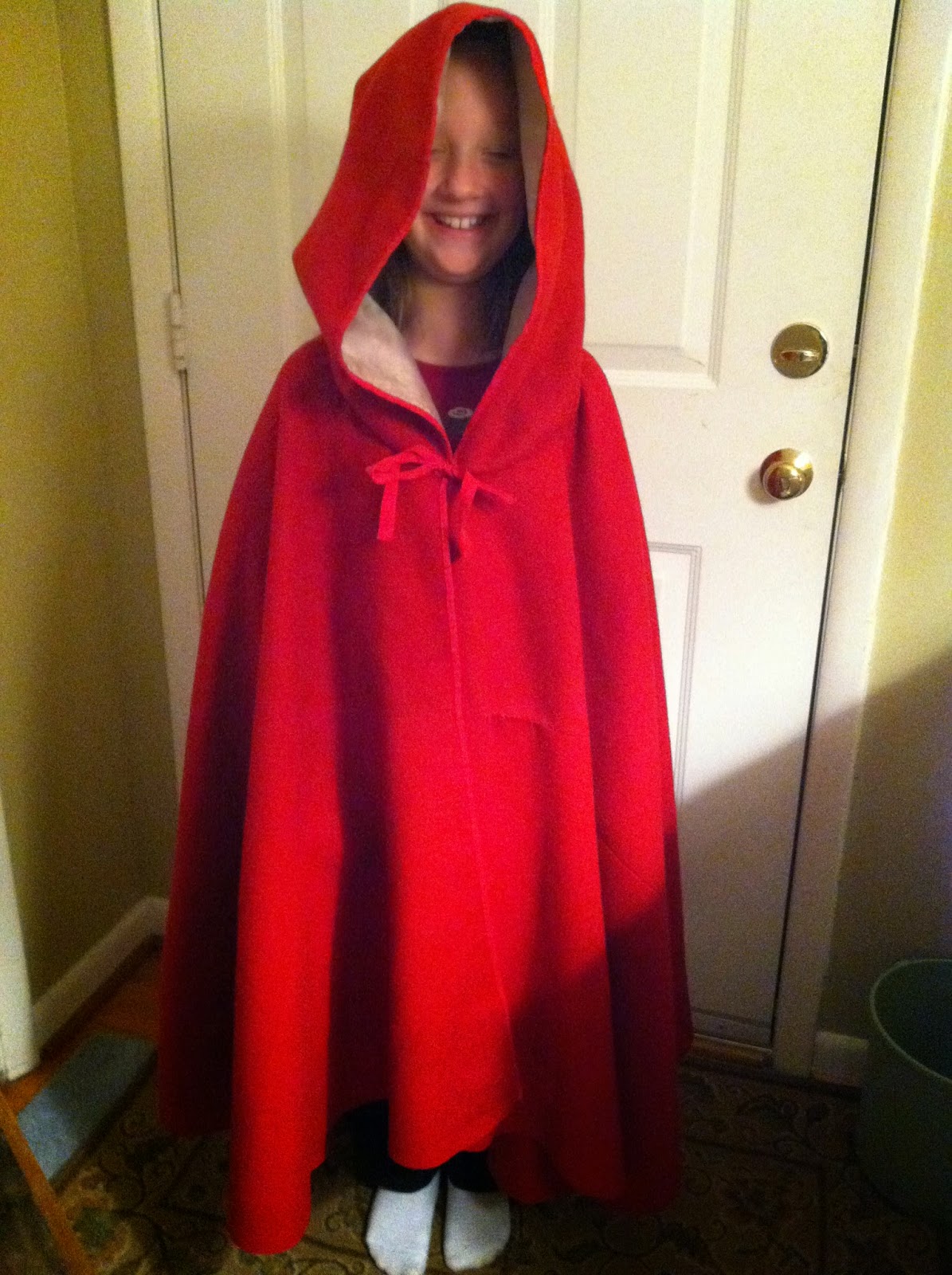 The table is also done. Or, done enough for now. I'd like to get a smoother surface on it, but I need to find the right brush, or applicator. 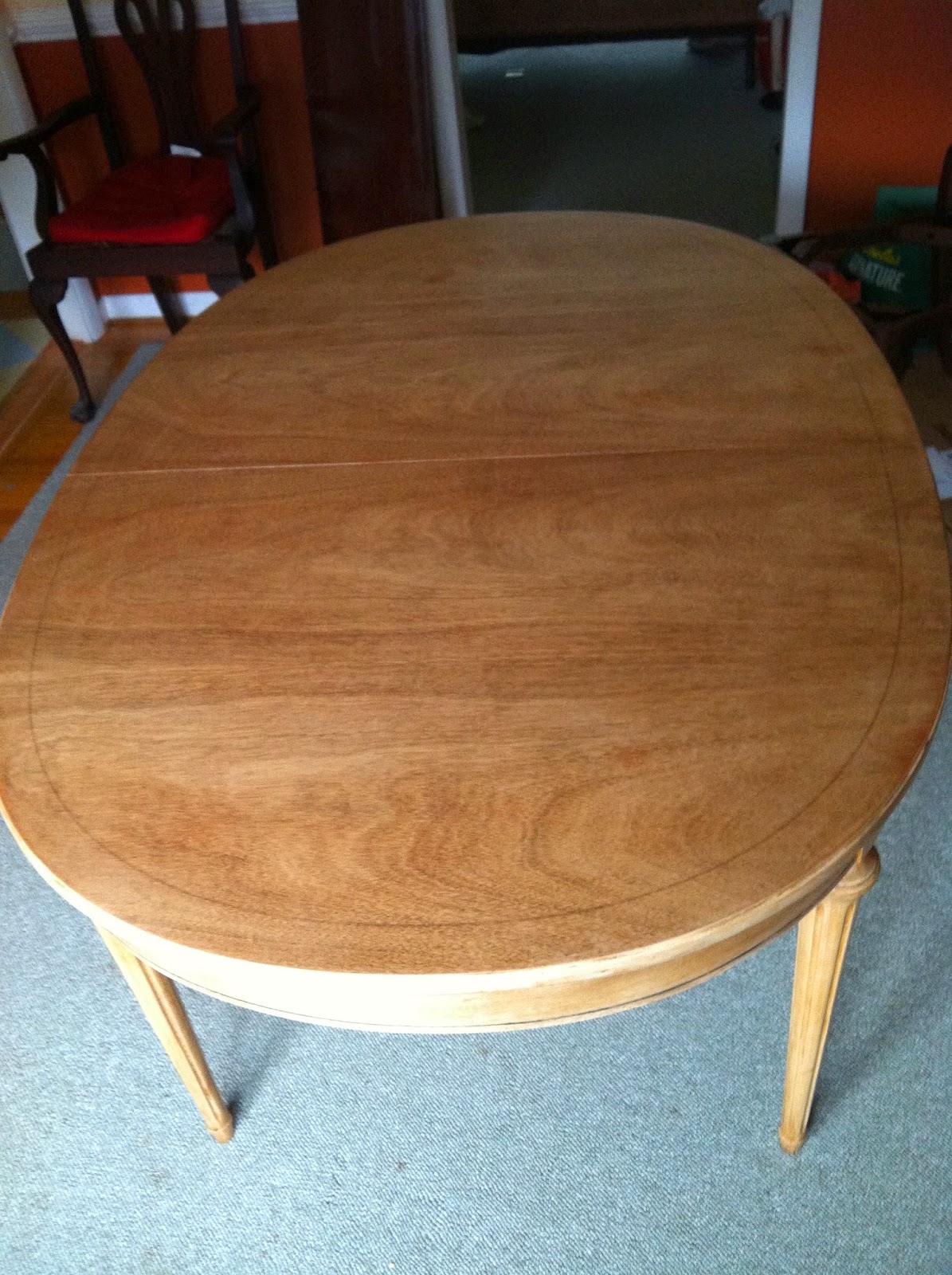 Not a great picture, but I'm happy with the table. 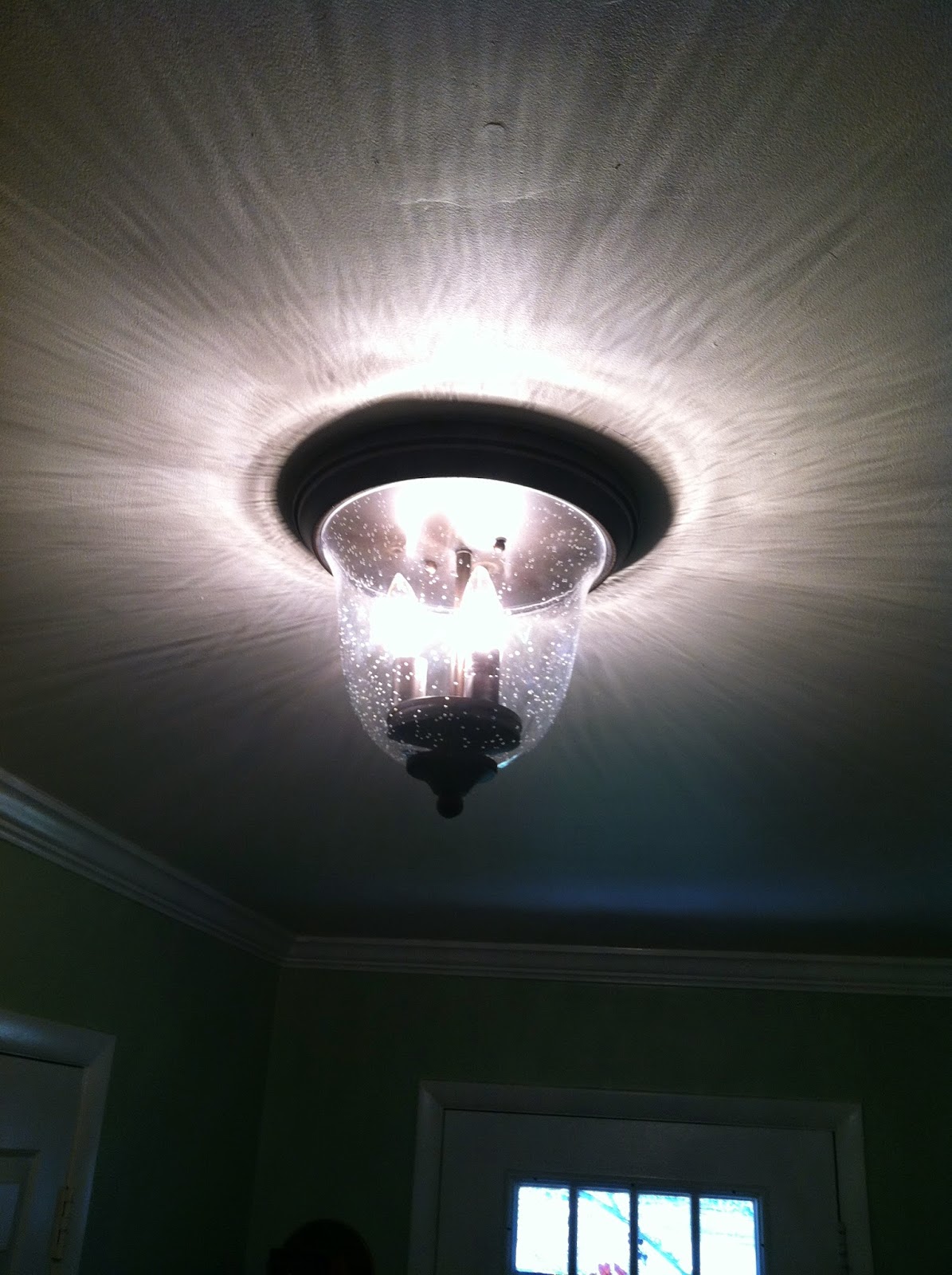 I switched out two light fixtures -- the downstairs one more than once as I think the first replacement had a short in it. Replacement #2 went in easy-peasy. In part, because I figured out that one of those lights that clip onto the bill of your ball cap would help. Much better lighting that the floor lamp snaked in on an extension cord from the other end of the house.
I also decided the holly "bush" needed to be trimmed back. I couldn't get the hedge trimmer through it anymore. 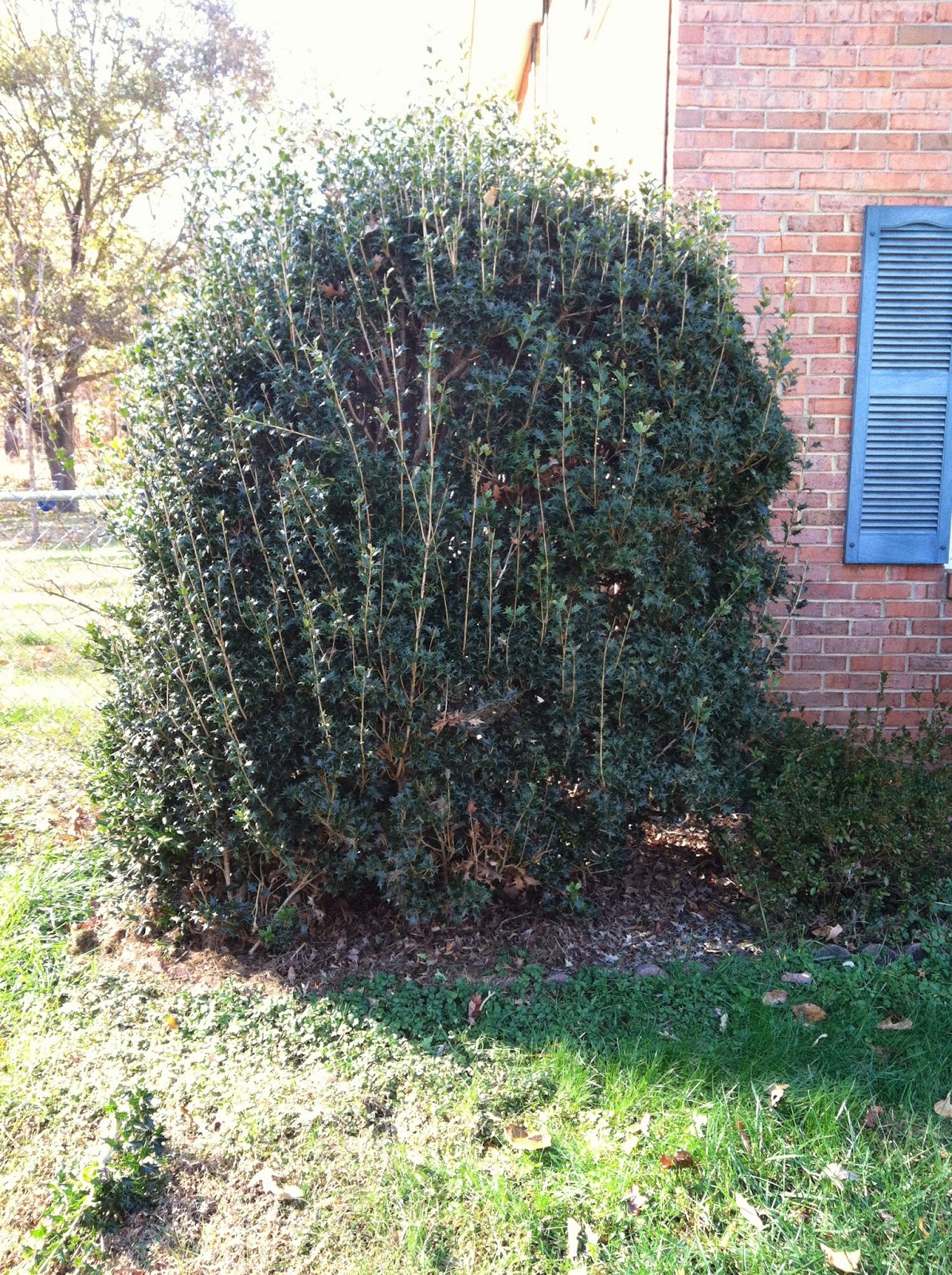 It was so thick, I had to cut it down to see what was in it, so to speak. Arms are still like jelly ...


This morning, I woke up and decided that compared to the refinished table, all my chairs looked like crap. So I decided to refinish one. 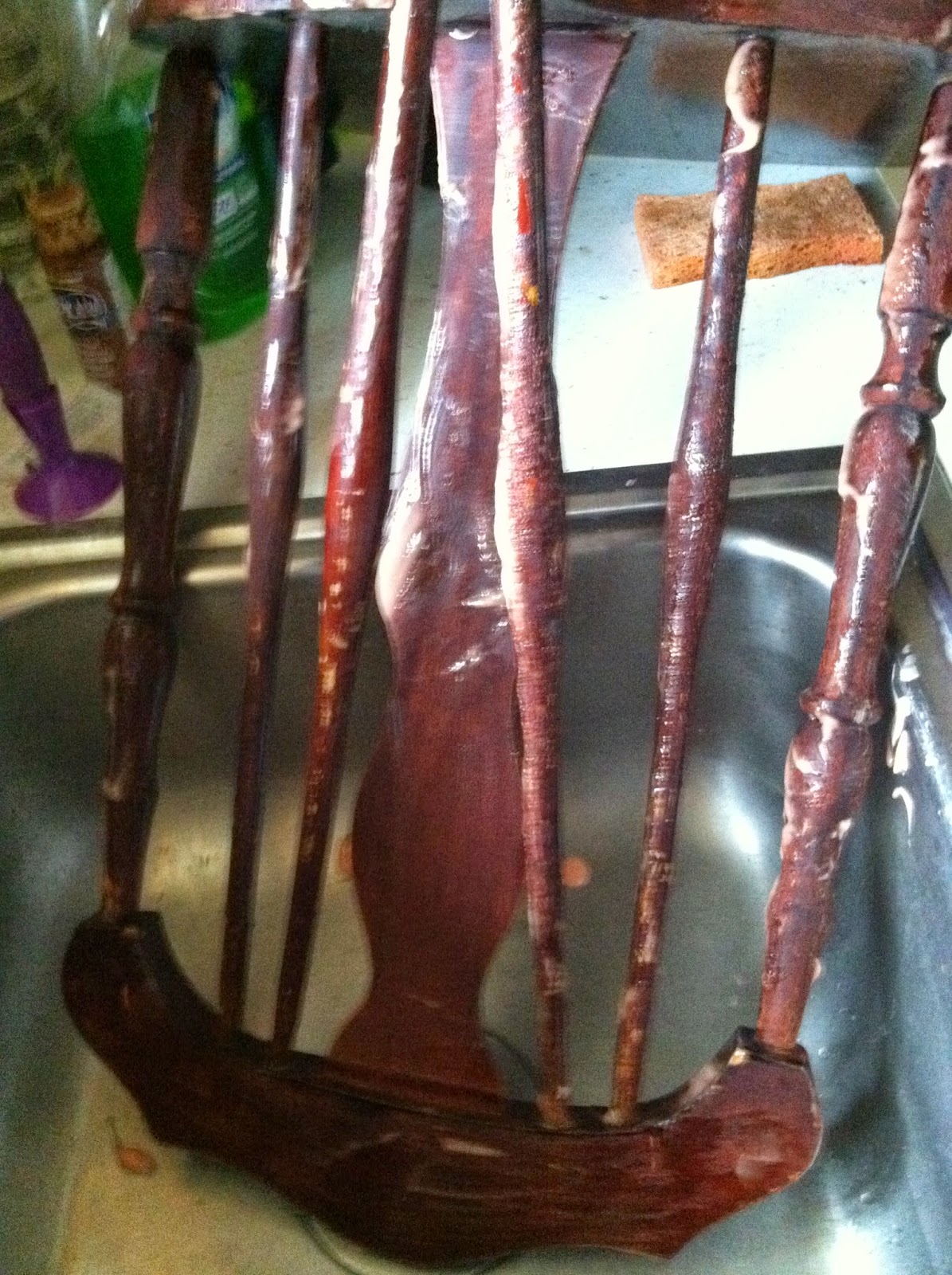 A 1940s Windsor-style chair with a faux mahogany wood-grain finish that was chipping off  gets covered in stripper ... 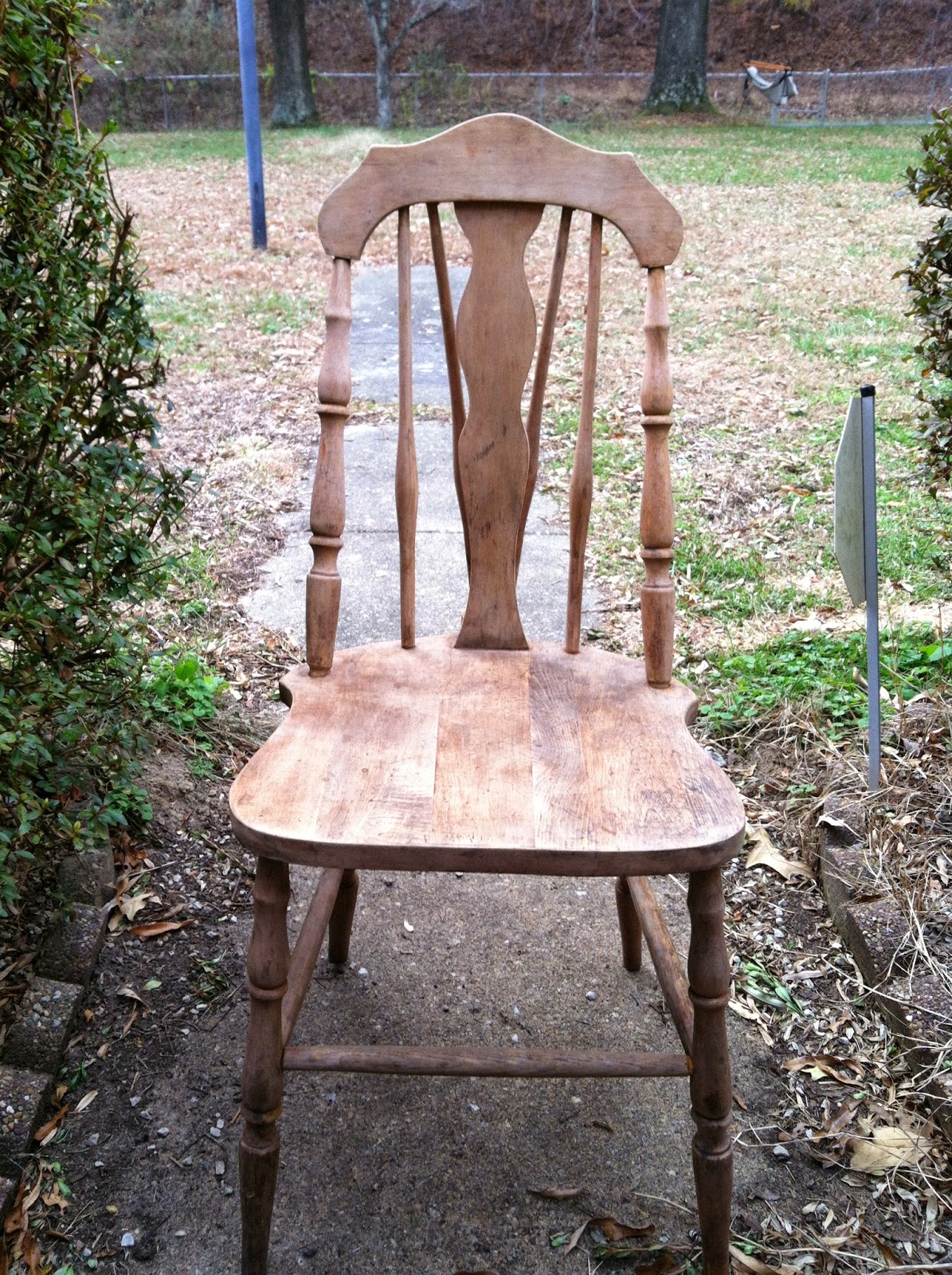 And it was ugly. Clear -- not a knot to be found, but ugly and blotchy. The turned pieces looked like birch. The seat is several sections of pine. I was brought up to believe that painting wood would send one directly to the fiery pits of hell ... so I tried staining it and hoping the pieces would sort of blend together. 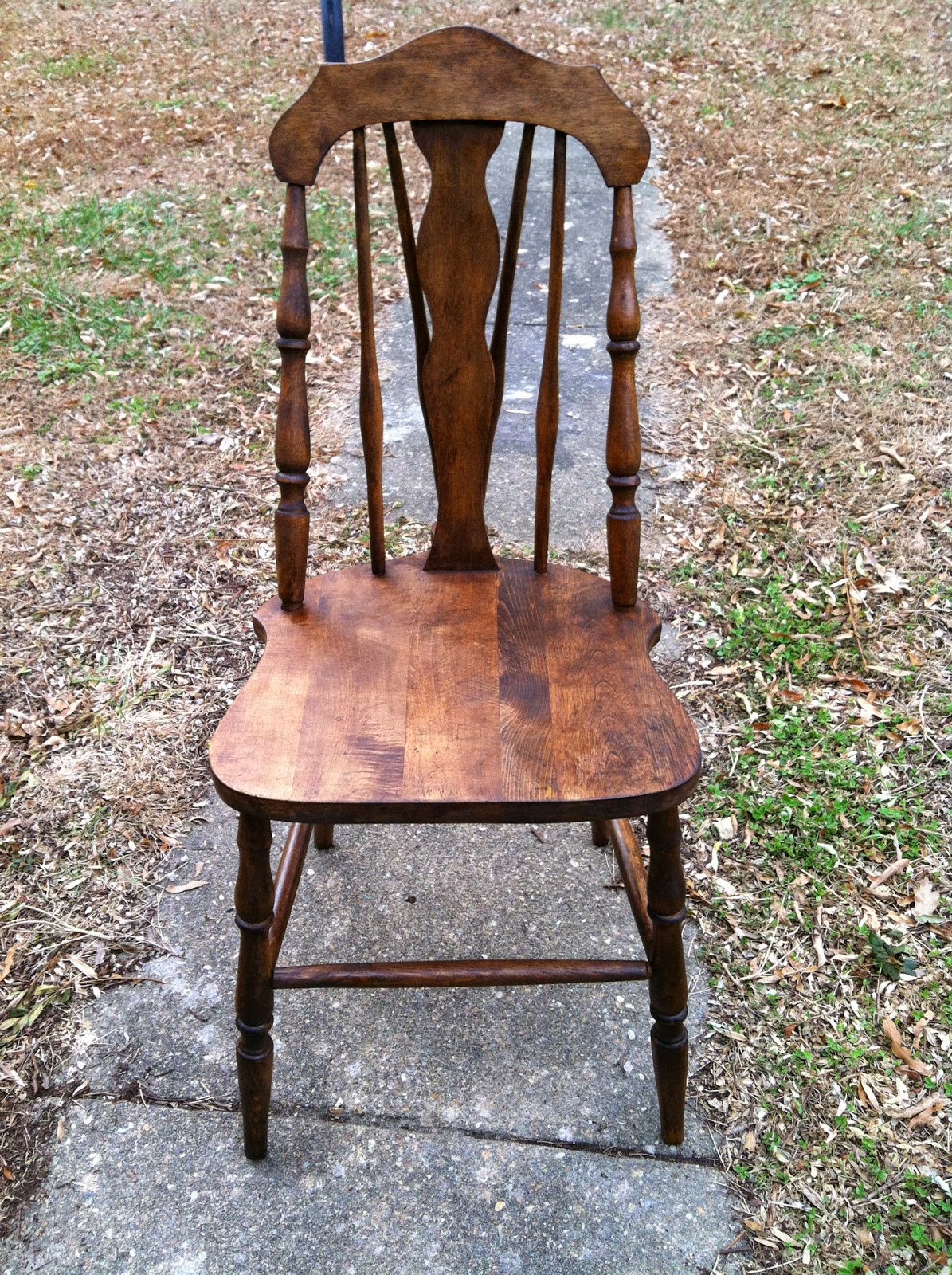 Nope. Now it was dark and blotchy. So ... I decided to use milk paint on it. It's currently in process and I'm cautiously optimistic. And that is a post for another day ...

Now it's time for an adult beverage, some analgesic and a book.
Posted by Nancy R. at 8:23 PM 5 comments:

I'm still juggling three different projects. Nothing is done yet, but all are creeping closer.

I played Tetris with all the red wool scraps and pieced out a hood. I've got it lined, and I'm now trying to gather it to fit the neckline on the cloak which also needs to be gathered to fit. Then, I just have to decide if I want to bind the edges or not. It shouldn't be necessary, but this cloak is cobbled together from so many pieces, I think it would add some structural stability. 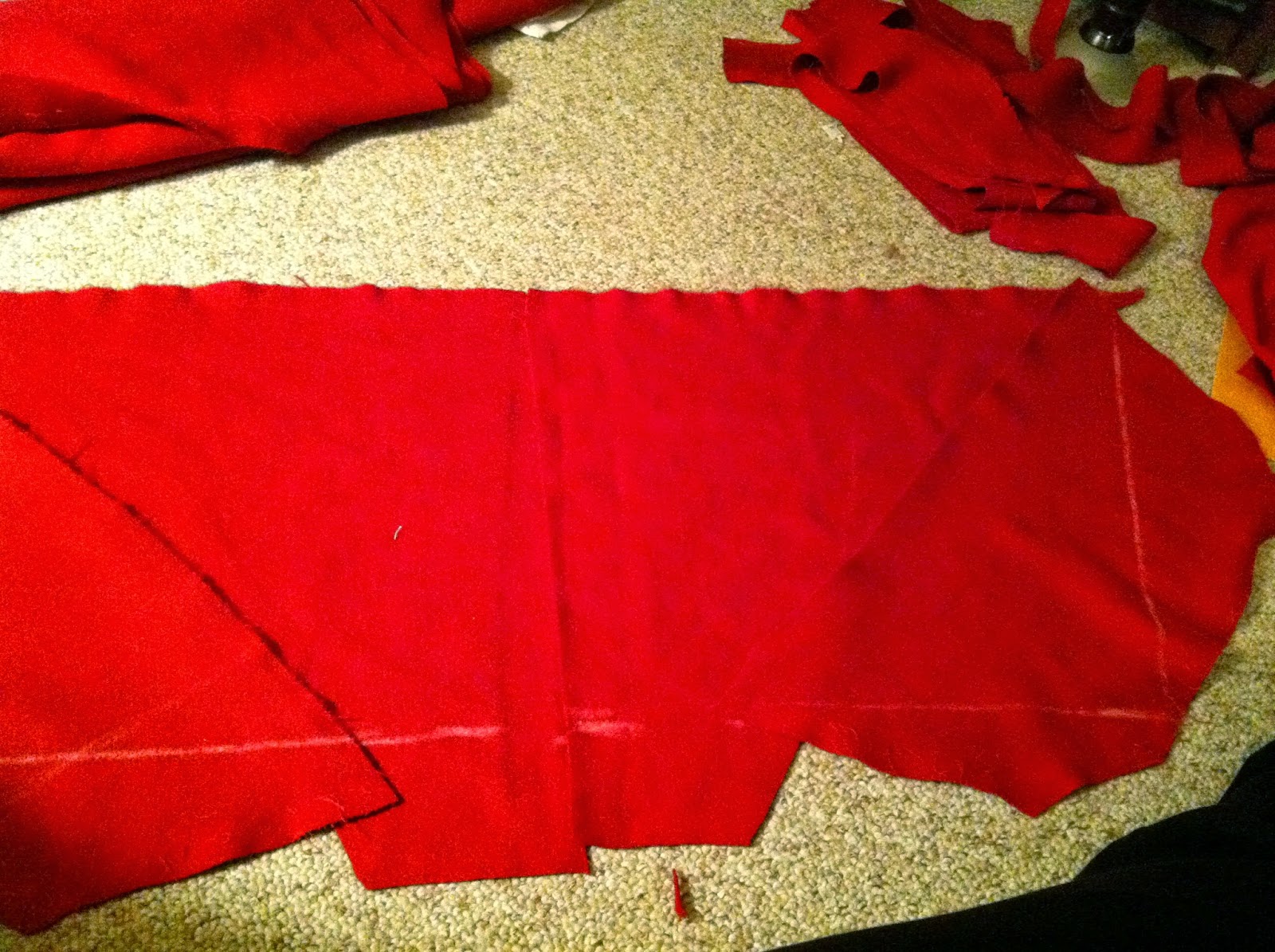 This brown linen project got test-pleated to make sure my math was correct for what size to make said pleats. 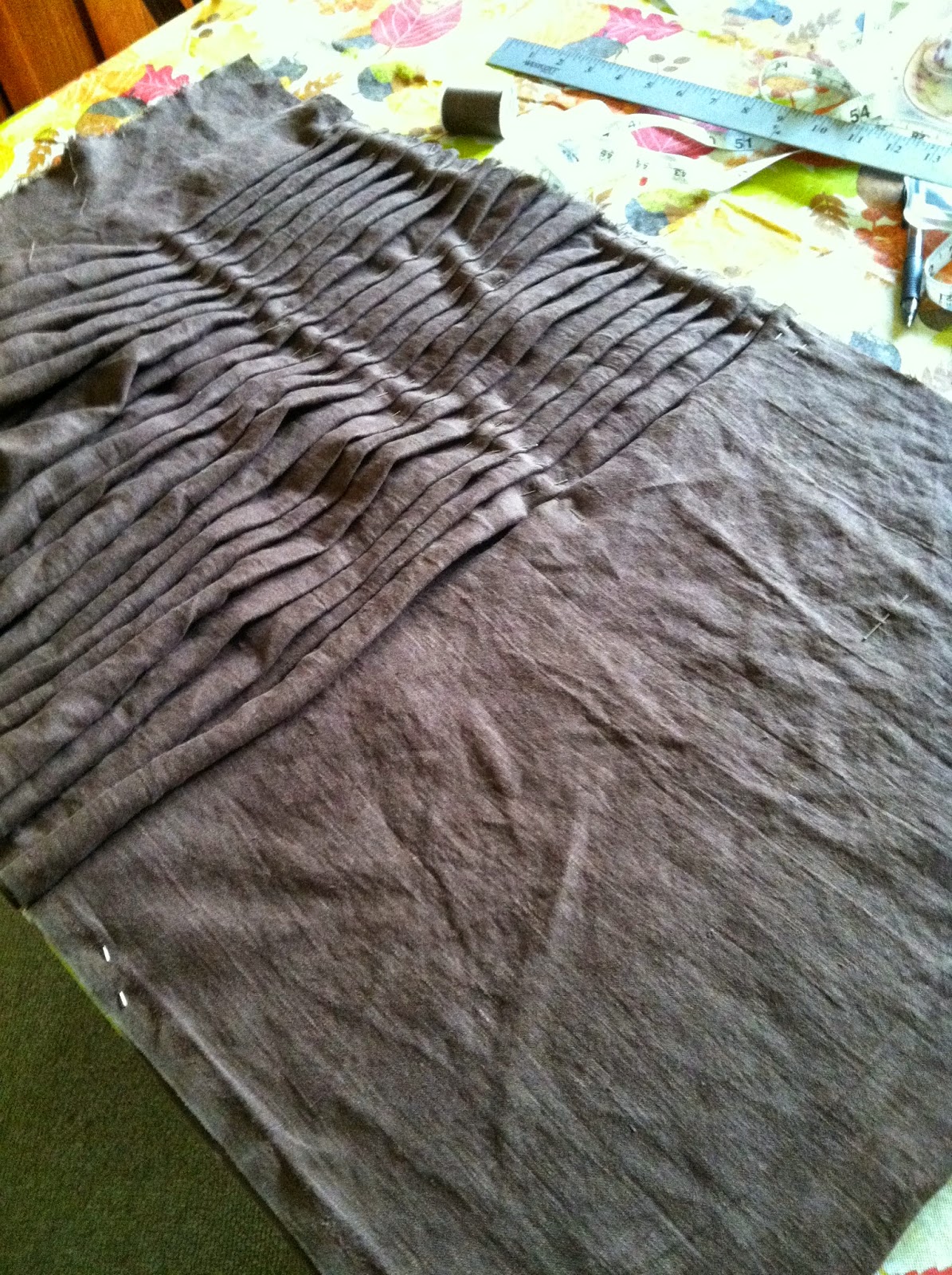 It seemed to work, so now I take all of them out, sew the two pieces together and start over, measuring very carefully this time.

Finally, the maple table is starting to look like I'm doing something right. I might even get it done this weekend. It's too cold and wet to work outside, or even in the garage, so I just decided that I'll have to clean and dust the first floor really well when I'm done. 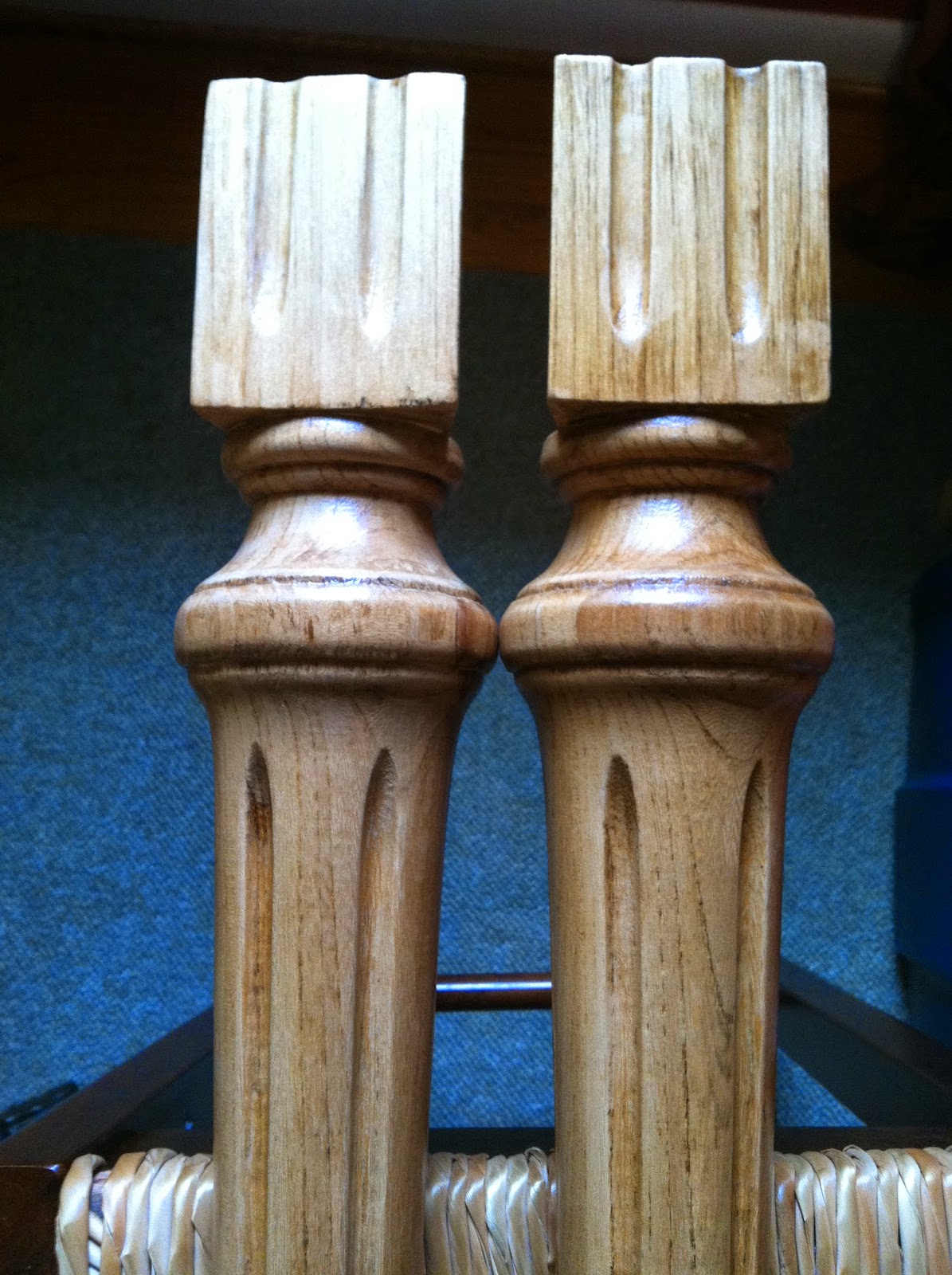 And of course, all the regular housework is piling up. I'm keeping up with the essentials like laundry and groceries. but the clutter is piling up and driving me crazy. It's my own fault, but I'm hoping I can get caught up this weekend.

I hate spending time cooking and cleaning up a decent breakfast, especially when I'm busy. My new favorite it peanut butter and bacon on graham crackers with a cup or two of coffee when I've got stuff to do. Like today.

I have three projects going at once. There's the relatively easy red cloak (unless I just jinxed it), another sewing project (more on that later if it works) ... 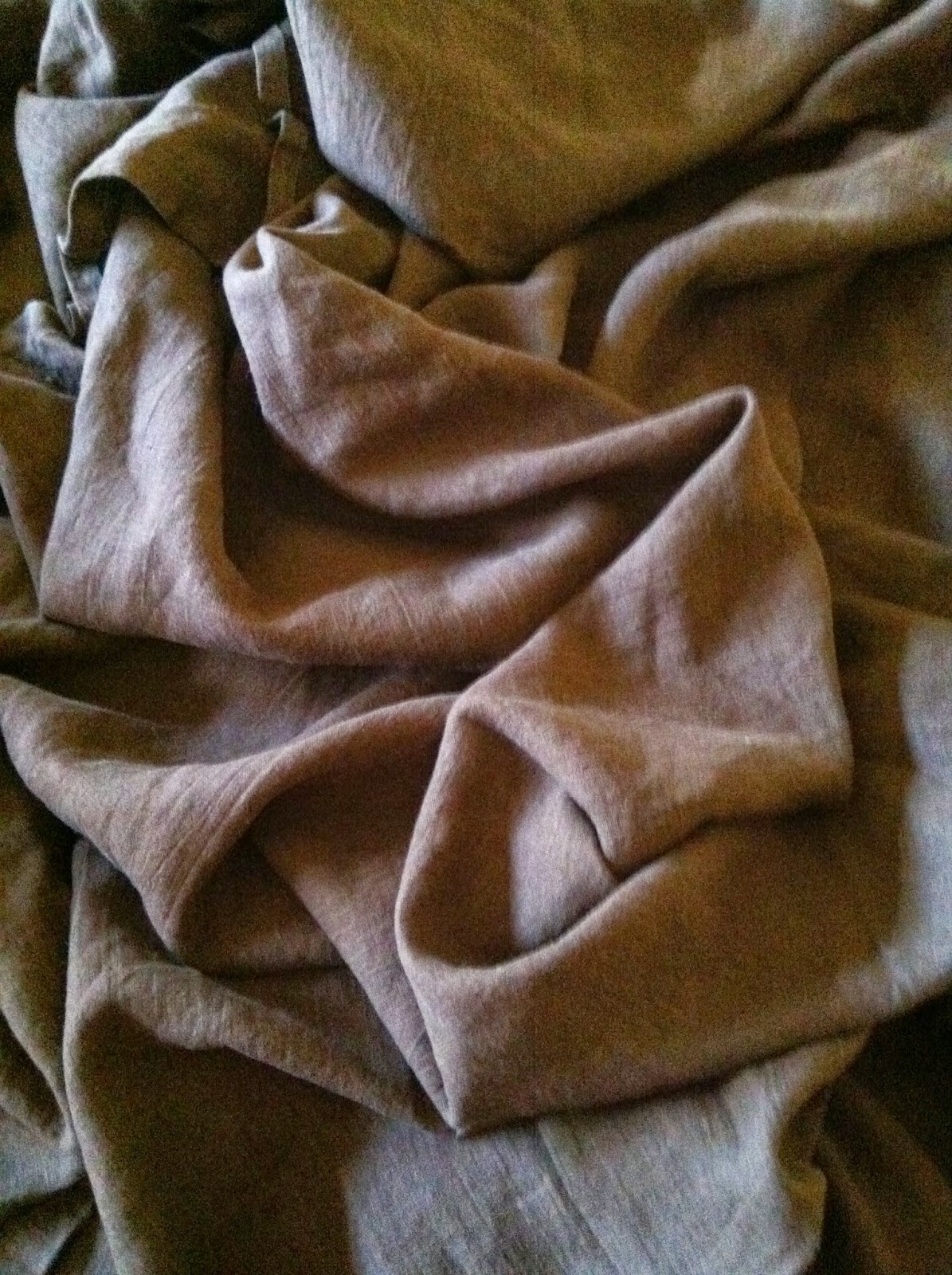 ... and a table I'm refinishing.  My current dining room table is just too big for the space, and I picked up a smaller oval table on Craigslist for a song. It turned out to be a post WWII maple table, and for some insane reason, I decided to refinish it. The legs had mellowed to a lovely golden color, but the top had a slightly greenish cast to it that was so popular at the time. I've gone from the "!#$&^#!! WHAT have I gotten myself into?" stage to the cautiously realistic stage. 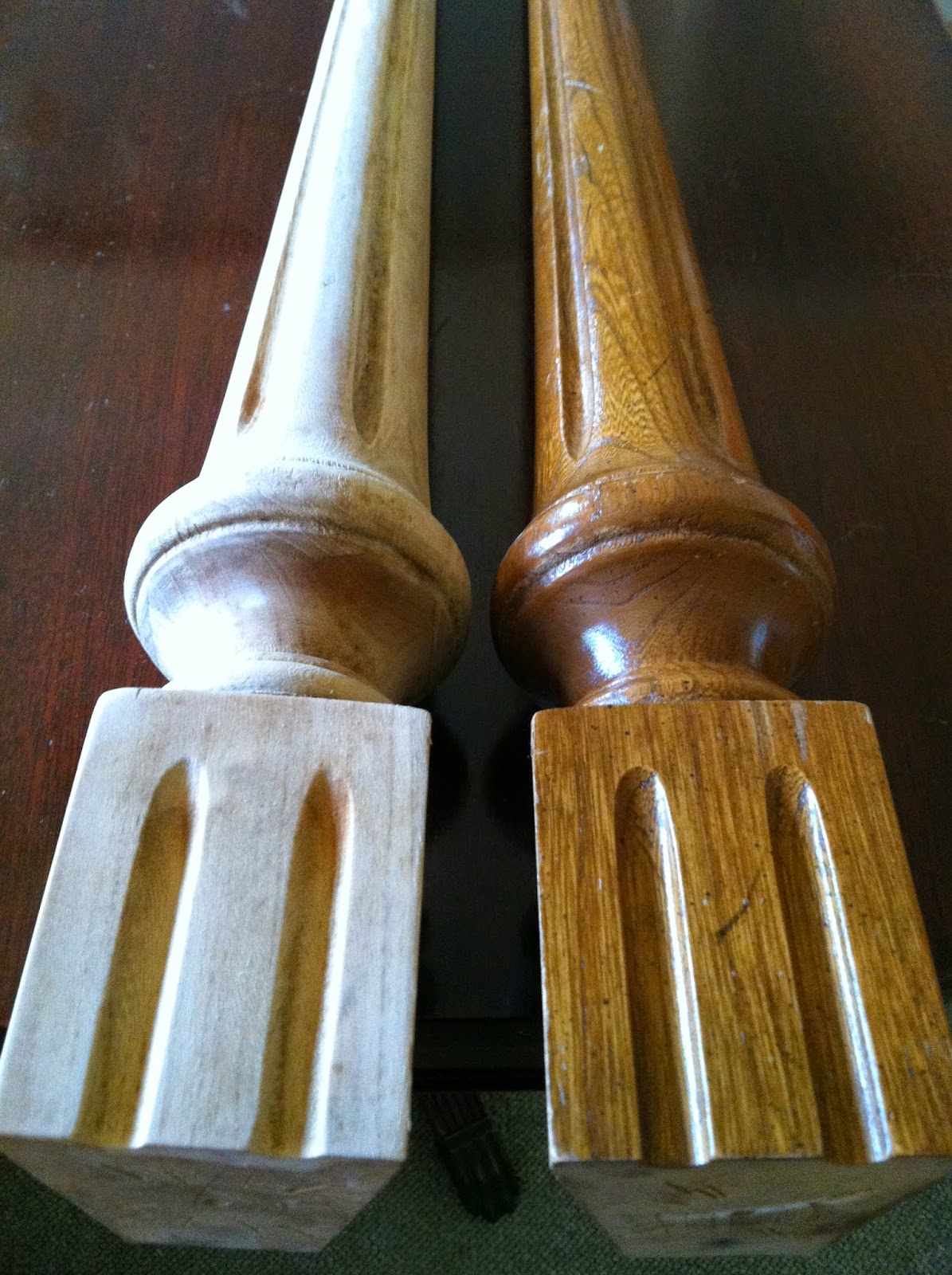 Once it warms up a bit, I'll be hauling all of this back outside to work on, but until then, I've got plenty to do inside, including drinking that second cup of coffee.
Posted by Nancy R. at 9:10 AM 2 comments: 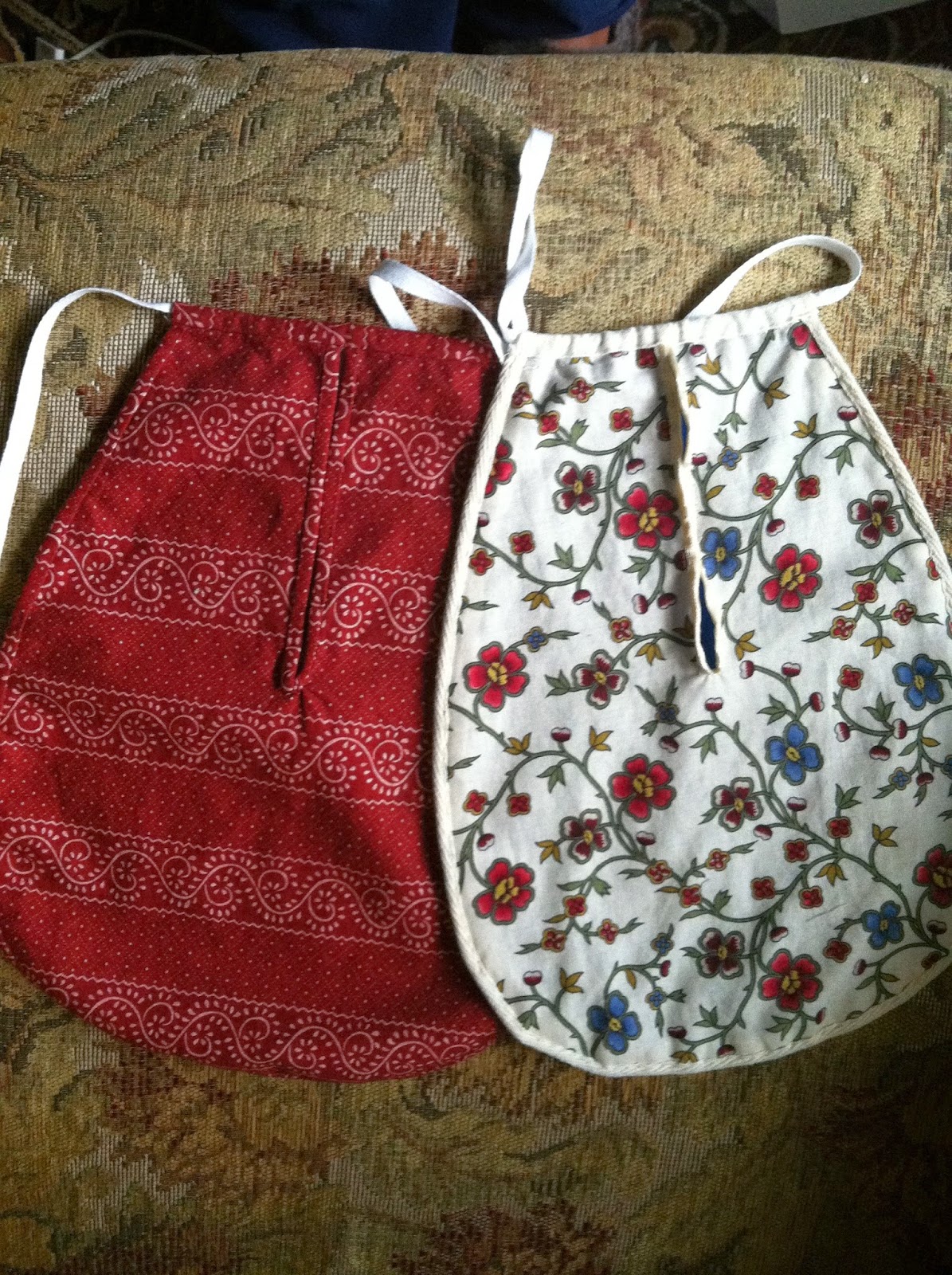 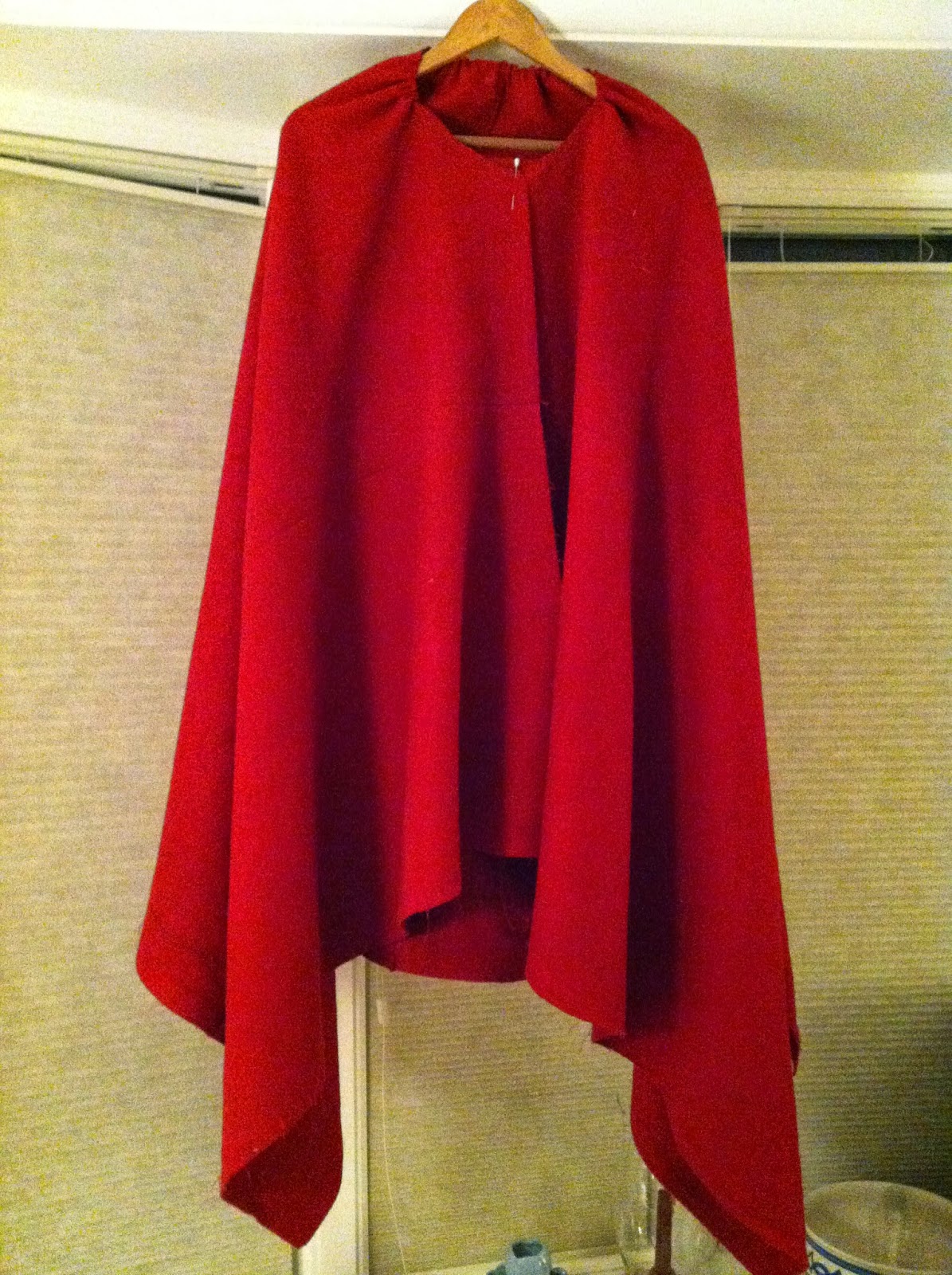