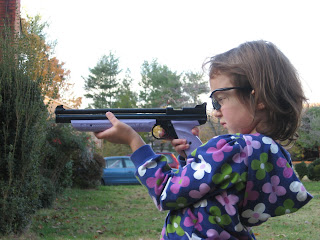 It being up near 60 degrees this afternoon, we decided to go outside and shoot the pellet guns.

There was a lot of this:


With the Big, Bad Wolf properly perforated, it was time to move onto a more traditional target.


SD was not happy with her results. It didn't matter to her that she hit the center line, because she didn't hit the center of the target. She aimed for the center, but hit high, not once, but twice, and was quite frustrated. And when she hit outside of the circle, she insisted it wasn't her fault, she wasn't aiming there!
﻿ ﻿
She was frustrated, and not having fun, so we decided to switch it up and gave her the option of firing my pellet rifle using a rest. 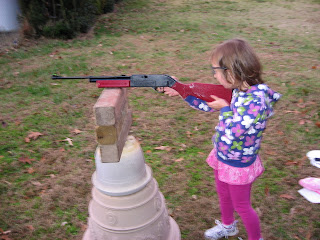 She liked it. A lot.
Fun was had by all, and plans have been made to do it again tomorrow.
Posted by Nancy R. at 11:12 PM