Good news: We got to go shooting on Sunday! Sweet Daughter loves using a scope. 10 out of 10 balloons. 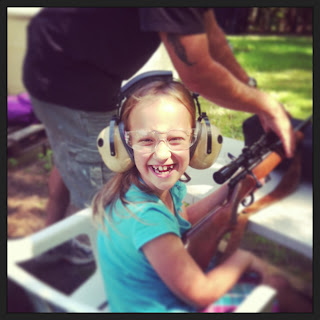 Bad news: I need a LOT of pistol work.
Good news: Second time shooting skeet and I average 2 hits for each miss.
Bad news: My shoulder felt it today.
Good news: It looks like SD does not have chicken pox as day care suggested today.

Good news: Chigger bites means she can still go to 2 dental appointments, school orientation, an eye appointment, get a hair cut, out to lunch on Thursday, and start school next Tuesday. 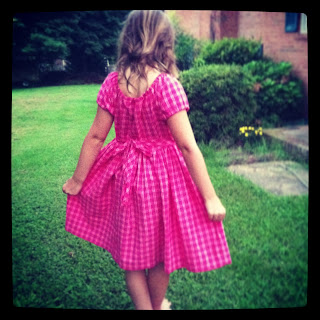 There was some talk bandied around at the Kidshoot about a flint-lock 3-gun "competition" this fall.

Dr. Mike has been busy squirreling away black power and casting lead ball this summer.

So, is there any interest? We're planning on Columbus Day Weekend (October 12). Dr. Mike will supply the guns, the powder and the ball. 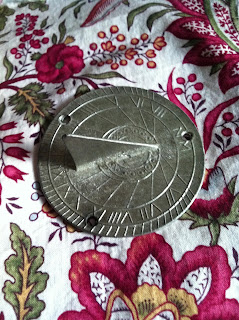 And I have the timer!

Today was the second-to-last day at Y Camp for Sweet Daughter, and they planned a cook-out at George Washington’s Birthplace. That only meant 40 miles out of my way, round trip, but what the heck. I showed up a little after 4:00 and the grill was going. They were cooking hot dogs over a third of an 8 lb. bag of charcoal and … hadn’t thought to bring any implements. They did have Matchlight charcoal AND lighter fluid (two is one!), so maybe that made up for it. Then I noticed the director trying to move hot dogs around with … a plastic picnic knife.


I told her I had a small multi-tool in my purse with pliers on it if she wanted to use it. She looked at me funny, for some reason. So I offered her my pocket knife.  Then I just offered to take over the grilling if she’d like. I also pulled two deep tin dishes out of my car to hold the cooked hot dogs.  Just so you know, I do not usually grill. I’m never making that much food at once, or feeding that many people. Adding more charcoal when you can’t remove the grill was interesting. As was the fact that it was impregnated with go-juice. I got some interesting reactions. Some shrank away – one kid in particular said “is that a POCKET KNIFE?!!11??” while skimming past the hot grill. And another stood at the prescribed safe distance and said “Hey! Is that a Gerber?” (It was.) “My first knife was a Gerber! Got any SOGs? Those are my favorite!” (I do.)


Sixty hotdogs later, my very hot knife was returned to my pocket. Thank goodness for the plastic on the handle.


After that, kids who had permission to go wading with their shoes on got to go fishing. I found that one way of hushing the loud adults who were countermanding the instructions of the park ranger was to inform them that they may be standing in poison ivy. That distracted them for a bit. 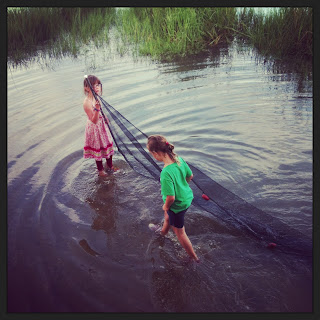 And the view over the creek was lovely.

Back to school shopping

I hadn’t really planned on doing much back to school with Sweet Daughter … she had plenty of summer clothes to get her started, but she decided she wanted a dress for the first day of school. So off we went. First stop … she saw jeans she liked. IN HER SIZE. Several pair that actually fit. For half off, AND I had a 30% off coupon. I jumped on those. SCORE.


And it all went to hell from there. 3 ½ hours later, and having hit every store that had girls clothes in the mall at least once, we had nothing. What wasn’t inappropriate was just plain ugly. Most were both. SD finally looked up at me with a mixture of disappointment and hope in her eyes and said “Mama … will you make me a dress?”

So, off to the fabric store we went. She found a cotton print she really liked. And then she started describing in great detail, what she wanted it to look like. So, we sat down with the pattern books and started flipping through the pages until we found one that was very close.


“Can you take that ribbon off, but add one here, and a ribbon sash?”

(I *did* have to veto the ribbon color that neither matched nor coordinated nor contrasted with her fabric. When the dress was done, she agreed that her second choice was the right way to go.)


So we got home and I altered and tweaked the pattern while prewashing the fabric and ribbon.


And this is how it turned out. Not what I would have picked, but I’m not the one wearing it. SD designed this herself and she’s thrilled with it, and it’s appropriate … and I’m very proud of what she came up with. 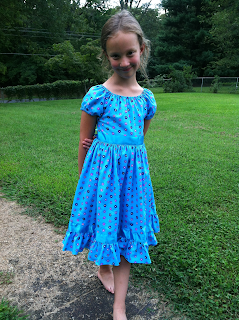 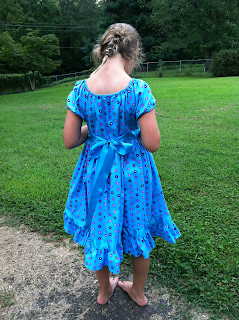