I owe you guys for a target!

So Sweet Daughter and I made it up to the Range this morning to meet up with a few of the “locals”. We hung up as the rest of the gang showed up. SD entertained herself (and us to some extent) by playing in a drainage ditch at the edge of the parking lot. She was leaping over a culvert with a steep slope up one side and some wobbly rocks over the opening of the ditch.


Me: "SD - be careful playing on those rocks. All I've got with me is Neosporin and bandaids. No needle and thread to sew you up."
Gunnie 1, offhand: "I've got a trauma kit, but I don't know how to use it."
Gunnie 2, helpfully: "I've got some Quick-Clot."
Gunnies are such helpful people.
So the range opens up and we get in line. And the crew grabs 3 lanes. I knew SD couldn’t shoot until she was seven, but I was hoping I could take her in and let her watch. Nope. Insurance regulations.  Two different people offered to watch SD so I could get some trigger time in, and for that I am extremely grateful, but it wasn’t their job to babysit. Besides, you know how there’s always “That Guy” at the range? That was going to be me, today. I could feel it in my bones. The trip started with me leaving my pistol behind and having to go back and get it, and my gun handling skills did not improve as the morning went on. So, I got to meet a couple of new faces and stiff the group for the price of a target.
You see, SD really wanted to take a target home and so we picked one out. And the guy behind the counter wouldn’t sell it to me because it was too much trouble to ring up just one target. He insisted on adding it to your bill. And he wouldn’t let me leave money to pay for it. I know, I could have just put it back and let SD see this as a lesson in Jagger’s Law but I didn’t because I didn’t want to risk a temper tantrum.  And I’m not talking about SD.
So, in closing, it was great to see familiar faces, and to meet new ones. I hope we can do it again sometime when I’m not “That Guy”. I’m sorry I didn’t get to say goodbye to y’all, and I owe you a target.
Posted by Nancy R. at 7:51 PM 7 comments:

Feeble attempt at an update

First, does anyone want to buy a 150 acre farm/estate just outside of Annapolis? The house was completely gutted and redone with new HVAC, kitchen, wiring, plumbing, etc. It’s on the water. It’s got outbuildings. It’s a long story, but if you’re interested, let me know.

In other news, Sweet Daughter has started field hockey and seems to be loving it. The schedule is kicking my butt.  I know, I know. Get used to it.

The local library is having an American Girl-themed tea party on Saturday. Sweet Daughter is going with her BFF, and they are encouraged to dress for it. Is it wrong that this is the first thing that popped into my head? 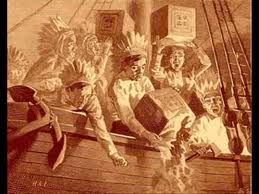 A handful are gathering in Stafford, VA, on Saturday to chew the fat and try to get in some range time. Sweet Daughter and I are going to try to make an appearance so that she can at least see how an indoor range functions. She can’t shoot there until she’s 7, but she should be able to at least take a look around.
More later …
Posted by Nancy R. at 9:56 PM 4 comments:

The most scared I’ve been on the road

JayG’s got a meme going. I’ve been hit head-on by a drunk, but I didn’t really have time to get scared even though I was on a bridge overpass. There was the time the cruise control wouldn’t turn off, Sweet Daughter was in the car, and the more I braked, the faster the car went to compensate. (I put the car in neutral, steered off the road and turned off the ignition. Waited a minute, and turned it back on. Reboot – it was all good.) This was a little different. This one scares me because of all of the “what ifs?”

It was in the somewhere around 1997, and a weekday as I left work in the DC area for a doctor’s appointment outside of Annapolis. I was driving a 1987 Mitsubishi Mighty Max pickup. It was a beautiful, sunny morning, and very few cars were on the road. Which is why I thought it was odd that I was being tailgated by a black sedan – there was plenty of room for him to pass. If slowed down, he slowed down. If I sped up, he sped up. I wasn’t terribly worried, I figured he was just being an ass. Then he pulled up next to me and made eye contact. And that’s when I realized that the situation was Not So Good. I was in a pretty rural area without any exits coming up. Mine was the next exit, but I had, oh, another 5 miles to go.

My mind raced ahead to think about the exit. Partway down the ramp, it divided. The left lane continued its curve (and to this day, I don’t remember where that left lane went), but the right lane cranked right, and then was a fairly straight downhill shot down to the other road.

So, I signaled and moved from the right lane to the left. He followed me. I waited until I was about a half mile from my exit, signaled right, and moved over. He followed right on my tail. I eased off the accelerator, signaled my turn, downshifted into 4th gear, and he tailgated me right on to the exit ramp.

At this point, I started picking up speed, and flipped my turn signal on to indicate I was staying in the left lane. I got going as fast as I thought I could go and not roll the truck, and at the last minute, cranked the wheel right and shot down the other lane of that exit ramp. He flew right past me.

Still being somewhat of a trusting soul naïve idiot, I figured it was just some jerk trying to intimidate me. At least until I looked in my rear view mirror and saw that he had stopped his car on the ramp, had gotten out, and was literally shaking his fist at me. And that’s when I got scared.*

Yeah. My blood pressure reading was a little high that visit.

*And to illustrate my former cluelessness further, it wasn't until years later when retelling the story that it dawned on me that he might have had duct tape, Hefty bags, a bow saw, and prior "trophies" in trunk of his. I'm a very lucky person, indeed.
Posted by Nancy R. at 5:57 PM 10 comments:

On noon on Saturday, I finished another 18th century girls gown for Sweet Daughter's best friend. Her birthday party was at 2:00. Finished in plenty of time! 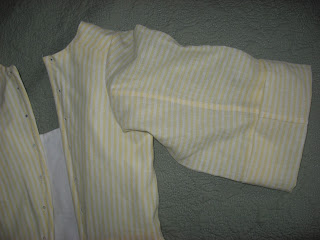 I looked at SD and said "Do you know what I'm sewing tomorrow?"
She looked at me expectantly and said "What, Mama?"
"NOTHING." 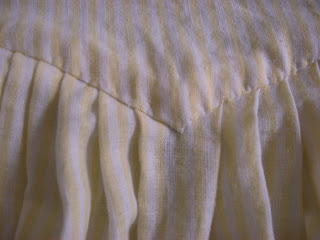 And so, on that note, I'm letting SD guest blog with a creative writing assignment she had in class. The assignment (1st grade) was to write 3 or more sentences about a leprechaun. Here it is, complete with creative spelling.
Once upon a time there was a leprechaun. He was very quite.* Once I saw him under a bush. I asked him for his gold he said to look under Scottland. I took an airplane to Scottland. I dug up Scottland and found no gold. The sneeky leprchaun tricked me. I dup up the whole Earth but I found no gold. So finaly I caut that leperchaun. He said his gold was not on Earth it was on Jupiter!** He burried his gold in Jupiter's red spot! I'll never find it I can't bleve you burried the gold in JUPITER! He said "OK! OK! OK! I will go get the gold. I'll be back in 100 days." "If you don't bring it to me I will crush you! Now GO!" So the leprechaun went to Jupiter. But all he brought me was the big red spot. I said I would crush him if he did not put the red spot back and get the gold! He said his friends would help the leprerchaun dig up Jupiter. He found the gold and I got the gold!
* quiet
** I thought this would have been a great opportunity to substitute Uranus, but I really don't want to contemplate a red spot on Uranus.
Posted by Nancy R. at 8:43 PM 9 comments: