I was congratulating Breda last weekend on her open carry experience and said “Hey! We should have an open carry day and see how many people we can get to do it!” And so we touched base with Mike W., who has been OCing for a while, now. And I know there are a lot of others out there that just do it and don’t blog about it, because it’s just not a big deal once you get over that feeling that everyone is staring at you like they did in high school when you had that giant Cyclops zit on your forehead that popped up after your Algebra class and nobody told you about it. (Don’t tell me I was the only one. We didn’t have Pro-Active back in the old days.) 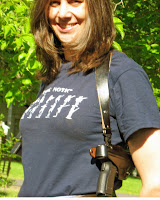 ANYHOW. June 5th (the first Sunday in June) has hereby been declared the first annual Open Carry Day for those that can do it. That's it. Just wear a gun, and go about your normal daily routine. The sight of regular people wearing a gun shouldn't be a big deal, and who better to normalize it than reasonably normal people? Report back with what happens. I’m hoping there will be a lot observations that “Person goes about their normal day with a gun and nothing happened!” It will turn into a non-event, which is exactly what open carrying should be.
Posted by Nancy R. at 4:40 PM