Sweet Daughter got to see the her first demonstration on Saturday. We went out with the other bloggers to watch the antis* march in and … 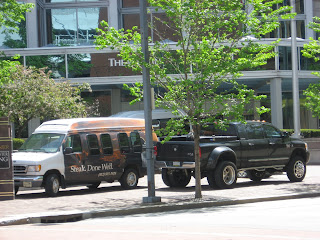 We hung around, got a bite to eat, visited a bit, and Sweet Daughter asked for a pen and paper. All I had was a napkin, but she sat down and proceeded to draw this. 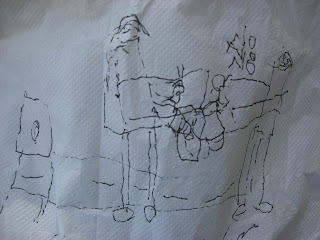 That’s a demonstrator trying to take her guns away. She’s the one saying “No No No”. That object with the circle in the middle off to the left is a target.

When she was done with that, she begged a piece of paper from JayG and walked around copying names off of NRA attendee badges for her “People I Like” list. It wasn’t technically a “Bloggers I’ve Met” list as she pointed out that she doesn’t have her own blog, and it included friends from her kindergarten class.

After waiting for around an hour with nobody showing up, we went back inside to stand in line to meet “Gunny” when the call came through that the demonstrators had finally shown up. We went back out, and I listened to their spokesperson being interviewed by the local news station. Near as I could tell, they wanted to make it very, very difficult for people to get guns legally as that would solve the problem of drugs in their neighborhood. Or something. I explained to SD that while I did not agree with what they were saying, they had a right to say it. Just like we could tell them how we felt.

And then I saw the woman across the street with the sign that said “Give your children hugs, not guns!” and something flipped the little switch in my brain from “rational discourse” to “THAT PERSON IS A THREAT TO SD’S SAFETY!”

Yeah. It wasn’t pretty. I yelled, and I was not logical, rational, or coherant. I learned that counter-demonstrating is not my strong point, and next time I’ll follow SD's exampole, and just point and laugh.

* On another note, it was determined that a group of hippies, like a murder of crows or a parliament of owls, should be referred to as a "Patchouli of Hippies".
Posted by Nancy R. at 1:08 PM