I'll let the other cool kids tell you about what's going on, but here's how my day has gone so far. 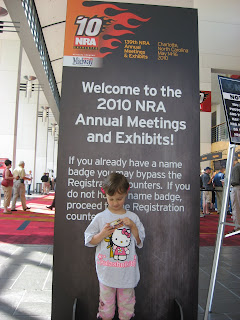 This is right before Sweet Daughter knocked over the 10' sign. Everyone was really very nice about it. She was squirreling around because she wanted to go here: 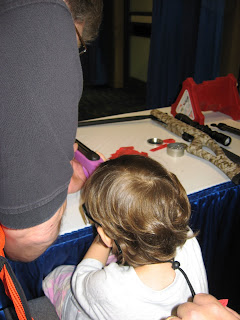 I can not say enough nice things about the people running the range sponsored by Pyramyd Air. And Sweet Daughter got to shoot a rifle. Then we stood in line to see ... 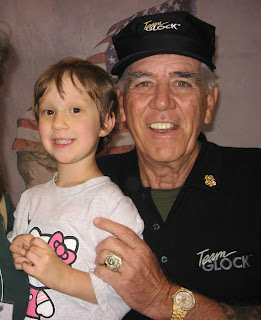 What a nice, nice (and photogenic) gentleman. I got up there and realized I had nothing whatsoever to say to him other than "Hey! I like blowing stuff up, too!" How original. When I told him that SD had asked for a handgun for her 4th birthday, he said "I can't give you a gun, but I can give you this." And he handed her a challenge coin.  Whatever sum of money Glock is paying him, he is earning every penny. And, speaking of Glock, they did a very, very good job of handling security around R. Lee AND making it seem like they were simply there as hosts. Providing extra hospitality. Yeah, that's it.
And last, but not least, the H-S Precision Booth. 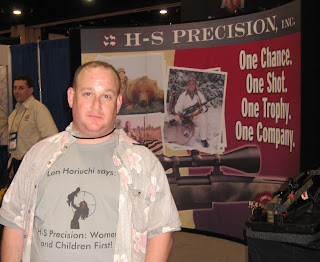 Shorter Half did not take up The Atomic Nerds on thier offer to win some free cocoa mix, but you will notice the booth is empty.
AND I got to meet Say Uncle and wave at Snowflakes in Hell Joe Huffman (apologies to all - I was misinformed!) up in the media booth. I feel like such a poseur.
Posted by Nancy R. at 5:47 PM