Son of the Snowpocalypse: The Return of Snowmageddon 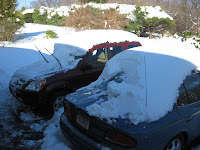 So, our first snowfall of the season occurred at the end of Autumn. We got about 18” or so and the weather gods were kind enough to dump it on the weekend. It was novel. It was fun. We still had enough snow at Christmas to build a snowman. It was perfect. 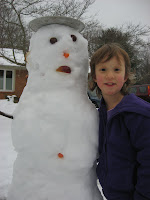 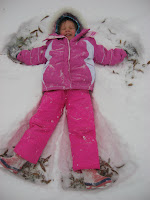 Then, the last weekend in January, another little storm swept through. Probably about 7” when all was said and done, it was light and fluffy, and shoveled easily. The roads were passable by the next day, and our road had so much salt on it, it looked like the rim of a margarita glass. The novelty had not yet worn off 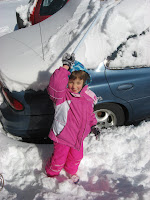 Then, a mere seven days later, it hit again. Snow. Then a layer of sleet. Then another layer of snow. We got a good solid 18” – 20” layer of winter, depending on where you measured. That, to put it mildly, was a bitch to shovel. Roads took longer to plow (due, no doubt to all the downed trees), and there was a dearth of salt and sand.

Now, a mere three days later, it’s sleeting. It’s supposed to switch to snow, and snow all day tomorrow. It’s not a weekend and I’m not amused. I got enough snow when I lived in Minnesota (13 years, and 2 weeks) to last me the rest of my life. 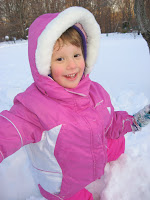 The bright spots? Sweet Daughter LOVES playing in the snow, and we have an awesome neighbor with a tractor and a blade who scrapes the end of our driveway for us. And I can think of worse things than spending a day at home with SD. I’m actually looking forward to it.
Posted by Nancy R. at 9:28 PM