While checking out some wonderful information on 18th century knit caps, I came across these two pictures. 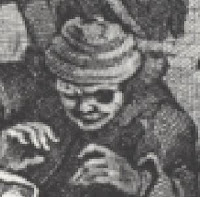 I wanted to reproduce that striped cap, and the cook in our reenacting group graciously volunteered to be the recipient of the finished cap, even though I’ve never seen anyone in the hobby wear a striped cap. Besides what we dubbed the “rasta” cap, I found a striped cap in Hogarth’s Industry and Idleness series. The same guy with the eye patch shows up in several plates.

I started by knitting a swatch on my needles of choice. Then using Mara Riley’s pattern, I scaled my pattern up since I was using a finer yarn, and cast on the navy wool. I knit about 30 rows and realized that my scale was way off. I also noticed that in both paintings, the knit cap was worn over a linen workman’s cap. So … I ripped out all 3 inches, knit a bigger swatch, recalculated how many stitches to cast on (remembering THIS time that it had to go over another cap) and started again. 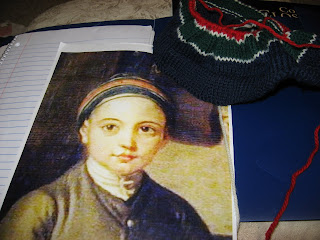 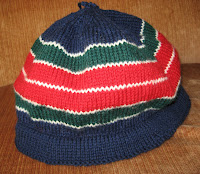 I used the "Porter" painting to try to gauge the scale. I looked at how much of the ear the navy yarn covered, and went from there. The stripes looked like they were a finger and a half wide. I kept knitting until I had what looked like was going to be that distinctive “bell” shape and started decreasing. I didn’t like the way the top looked, so I ripped that out, pulled out my copies of Mark Tully’s “The Packet” series until I found the directions for his knit cap and tried again.
I was happy with it, so I wet it, blocked it, and put it over a "bouncy ball" to dry. 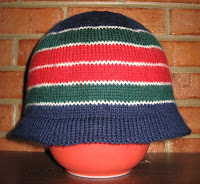 I’ll get pictures of it on our cook, complete with black felt hat, at our next event.

UPDATED to add: Another knit cap here.
Posted by Nancy R. at 9:55 PM