Or, “What Happens when a Rocket Scientist/EMT starts thinking about 18th Century Gunshot Wounds”.

You may have noticed a reference or two to 18th century living history on this blog. I’m a member of group that portrays a British Detached Hospital in North America. Most of the members are medical types and/or engineers. The Narrator of this tale, a member of our group and a Gentleman Engineer, who is also an EMT in Real Life, begins:

So the other day I was sitting around with my .50 caliber muzzleloader – great way to start a story, huh?


I had been hunting with it, but hadn't shot it in about a week. It was going to be awhile before I went again, and as you know, even with the modern synthetic powders, it's not a good idea to leave it in the guns for too long. So I needed to unload the gun. While there are other methods, the most expeditious procedure for unloading the gun is 1) point gun, 2) pull trigger. But it seemed like such a shame to just “waste” it. I needed something to shoot at. The butternut squash that got pushed to the back of the fridge and now needed to be thrown out was a tempting target, but oh look, the dog's old bone. A long time ago, someone had given her one of those really large cow bones that you see in the grocery store. She never had any interest in it, and I kept forgetting to throw it out.


My little mind started working – you know, I have to shoot a .50 cal bullet. If I shot it at the bone, I could be cool and have a bone with a bullet hole for medical demonstrations like Dr. Mike. So I got out my gun rest to make sure the hole would be nice and centered and, having heard them say they shot their bone at 6-8 feet, set up at a range of about 15 feet. Okay – when I say the bone exploded, I don't mean fell apart or pieces flying off. Think Wylie Coyote shoving a stick of dynamite into the marrow hole kind of explosion. Now while REALLY cool, and prompting a mystified eight-year-old to say, “Whoa …”, it did not produce the desired effect.


I have three thoughts as to what went wrong.


1. I think I remember the vet telling me that those kinds of bone have been hardened for the dogs. I can see how this could cause the bone to resist being punched through, but instead have all of the fibers act as a whole.


2. There was no meat on the bone. I supposed this could affect the velocity some and may even help hold the bone together.


3. (and I think the real problem) While my projectile had an appropriate diameter, it was not a ball. It was a 335 grain, conical hollow-point. I now have a new appreciation for what happens to the deer when it is struck by such a thing.


Okay – new plan.I have a friend who runs a family operated grocery store. They do all their own butcher work. We were in there Sunday, and I mentioned the kind of bone, with some meat, that I needed. She said she would find me something. I picked it up yesterday. Not wanting to reproduce my previous effort (at least not at this time!!) I thought I would call an expert. 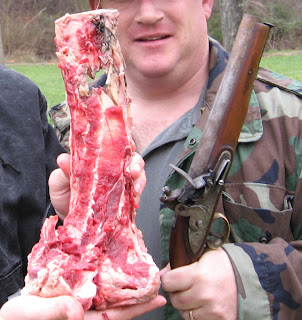 So they called us. Shorter Half for his weapons expertise, and me for my reproduction flintlock pistol and digital camera. The cow leg was propped up. About 3 feet away (good 18th century pistol range) the pistol was primed and loaded with a single ball. The trigger was pulled, and “Click! fffft”. Misfire. The pan was re-primed, and “Click! Bang!” Direct hit. 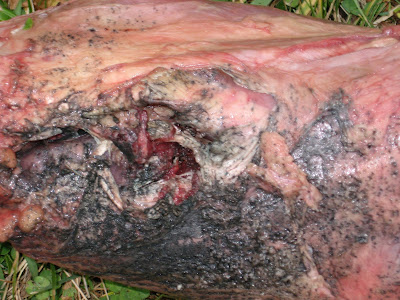 Powder burns and entry wound. Renmber, the muzzle was about 3 feet away. 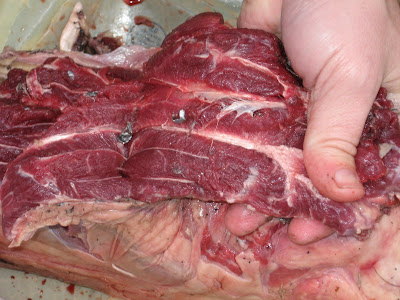 Fragments from the lead ball. 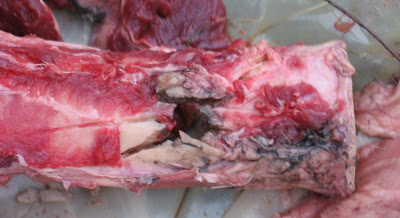 Entry hole with the meat cleared away. 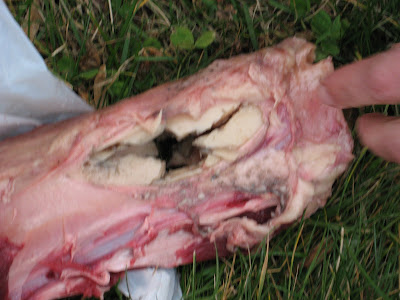 I just came back from The Bone's inaugural demonstration at (Local Elementary School). Actually it was the same presentation for 8 separate groups. Now I have to tell you, it turns out, the bone shape you see in the picture is being accomplished by the cohesion of the surrounding tissue. When said tissue was removed, I now had a life-size 3-D bone puzzle. At first I was a little disappointed, but then I thought, “Why not show the true destructive power. This is supposed to be a demonstration.” So with the help of some industrial strength ceramic glue (which comes with the warning “only use outdoors or in extremely well ventilated areas” – no seriously, I feel fine) I had reconstructed Frankenstein's bone. The 4th graders' most common comment was “WHOA!!! 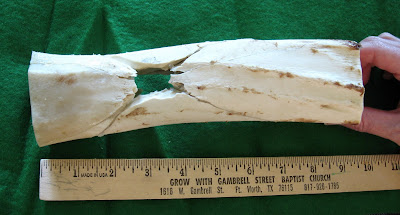 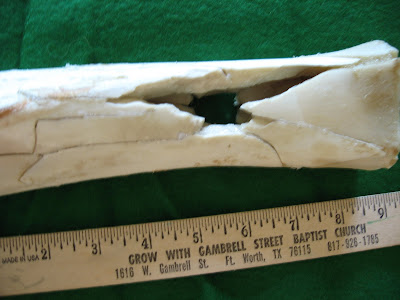 Frankenbone: Exit
Can you say "amputation"?
Posted by Nancy R. at 8:59 AM