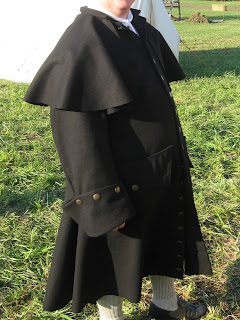 I started with an 18th century-style Great Coat purchased from Flying Canoe Traders. This coat was picked up at an event that was a lot colder, wetter and windier than forecast. I had tried making Shorter Half a GC, but the “one size fits most” pattern I had on hand didn’t fit him , and as a result I had a carcass of a half-finished coat sitting in my sewing room, mocking me, and doing him absolutely no good. So now we had a new coat instead of a case of hypothermia, and I started thinking about ways to make it better.


The very first thing that struck me about this coat was the cuffs and pocket flaps. The pieces had been cut out, stitched around the cut edges, turned right-side out, and attached per usual. They looked – puffy. 18th century wool of this weight held a cut edge and so the raw edges didn’t need to be folded in. The wool on this coat held a cut edge, too, so I ripped out the top-stitching and seam on a pocket flap. I opened up and flattened the seam, marked where the folded edge had been, hand-stitched next to it, and trimmed off the old seam allowance. What a difference! Then I did the cuffs, too. 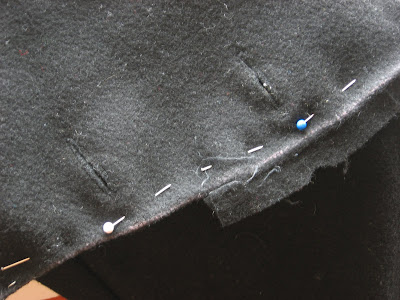 Concurrent with this, I worked on the buttons. The buttons that came on this coat were “antiqued”. The size and shape (profile) were okay, but the color -- not so much. Not a problem. Covered buttons are underrepresented in the hobby, anyway, AND I found a wool remnant in my heap o’ scraps that was a good match. I covered all thirty-eight buttons. 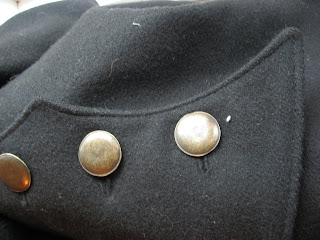 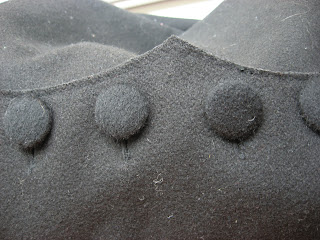 Pocket Flap and buttons before and after. 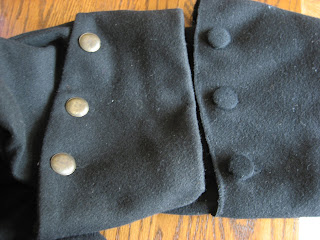 Cuffs, before and after.

Reducing the “puffiness” of the coat made a huge difference, so I top-stitched around the collar and down the front edges making for a crisper, flatter edge. Top-stitched edges on the left, puffy edges, machine stitching on the right.

Then I stared at that collar. I’d never seen a banded one like that on a great coat, not that that meant anything. From the buttons that went all the way down the front to the large cuffs, I could tell that this coat was a mid-century design, so maybe the banded collar was mid-century, too. Now, at this period in time, a collar that stood up (like the one currently on the coat) was called a collar. If it folded over at all, it was called a cape. I thought adding a cape would change the lines of this coat enough that it wouldn’t look like Every. Single. Flying Canoe great coat out there. It would also update the coat to a more 1780’s silhouette.

Part 2 later if anyone is still reading ...

Obligatory disclaimer: No, Flying Canoe Traders doesn't know who I am and didn't give me the coat. The coat is entirely fine for may impressions, I just wanted to see if I could make it better.