Just got the good news!

They got Osama. How very fitting that we stopped at the Shanksville Memorial on the way home from the NRA Convention yesterday. As Shorter Half pointed out to Sweet Daughter – it was not a graveyard, it was a battlefield. She understands that there are bad guys out there that want to do us harm simply because they are bad guys, but it was still difficult explaining the magnitude of what happened on September 11th, 2001. Her alarm clock just went off, and I got to tell her that the bad guy who decided those planes should crash into building was dead. 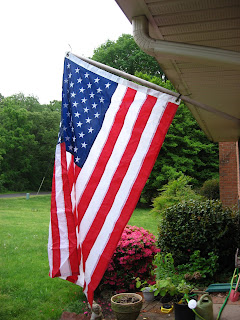 We’ve already run up our special occasion Colors. This flag flew in the skies of Afghanistan aboard the RQ-1B Predator, tail #96-3053, on November 7th, 2002 in support of Operation ENDURING FREEDOM to aid in the capture of Al Queda and Taliban terrorists.
Posted by Nancy R. at 7:02 AM