I don’t know who ordered the weather, but dang. It was perfect. In the 70’s with warm sun and a cool breeze.  Broken Andy brought an inflatable bouncy thing which was a stroke of genius as far as letting kids (especially the ones that traveled more than 10 miles) work off some energy before settling down to break things with pellets. 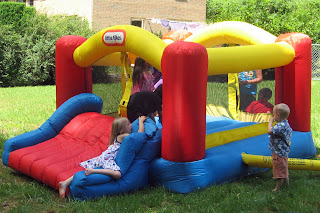 JB Miller brought a box of clays and wire coat hangers and did some wire origami magic and made a cool hanging clay holder thing that I didn’t get any pictures of. This, along with some balloons, some hanging soda cans, some soda cans on a ledge, and a couple of store-bought reactive targets made up “the range’.

There were 11 adults, all told and 10 kids. 6 of the kids belonged to gunnie-type parents, and 4 were classmates of Sweet Daughter’s. Michael W. (Cutler to the Stars) started things off by letting the kids handle a tomato and note the resemblance to their own selves – a skin covering firm, yet kind of squishy insides. Then he promptly shot it with a pellet pistol and showed them the damage and explained that shooting a person would do the same thing, so don’t do it.


The kids came and went on the range, taking turns with a grown-up helping them out, and playing on the swing set and sandbox when they weren’t waiting. It seemed to go really well, and I don’t think there was a kid there that didn’t have a grin of accomplishment at one point or another. 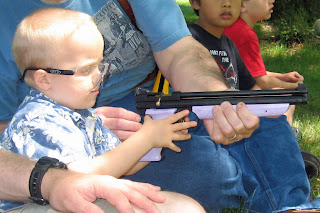 The adults got their chance as well, and I may have another mom hooked on the idea of shooting. After getting the hang of the pellet rifle, she pointed at my pistol and asked if she could shoot that as well. I explained that there wasn’t a safe place in my little yard to do so, but that there was talk of getting a “Mom Shoot” together for beginners and she should really come to that. I kept a calm and neutral tone, but inwardly I was jumping up and don’t clapping my hands yelling “WE’VE GOT ANOTHER ONE!!!”
Then there was the food. Oh, my goodness, the food. Everybody brought stuff. There were burgers and hot dogs. Michael W. took Vidalia onions, quartered them and wrapped them in bacon, secured with a toothpick. And then he grilled them over low heat.


Mr. A Girl brought deviled eggs and cupcakes. There was pumpkin crunch. There was rainbow Jell-O. And for party favors, there were little chocolate revolvers. 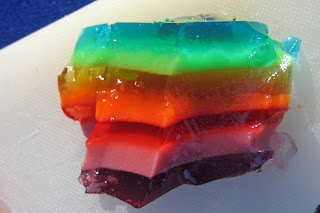 But guess who the one kid was who didn’t shoot? Sweet Daughter. After everyone except JB Miller and his lovely wife had left, she said “HEY! You didn’t call me up to shoot!” I replied that she never asked to shoot, and I wasn’t going to have her perform like a trained monkey if she wasn’t interested. JB graciously donated his leftover clays and high-tech hangers and she had at it.

All in all, I think it was a successful event. The kids were all well behaved and considering that there was a wide range of ages, all interacted very well with each other. The adults seemed to enjoy the afternoon almost as much as the kids did.

In the lessons learned section, I think having activities other than shooting for the kids to do was key. While we had a ratio of almost one kid per adult (an it seemed to work well), but I think it would work with fewer adults. Reactive targets are the only way to go, and I think the ones that make some noise (plink, pop, crack) as well as visibly changing form when hit were the most popular. We had hand wipes down on the firing line to use after handling pellets. We had plenty of inexpensive shooting glasses to pass around. We had name tags. While I was still riding a wave of adrenaline that evening I said I'd do it again in a heartbeat. Two days later, I don't think my opinion has changed.