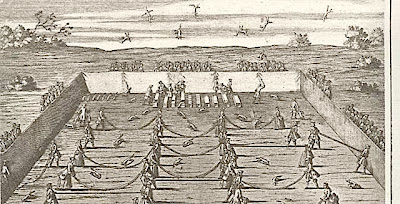 You know when you get a song stuck in your head – that all-consuming earworm – and the only way to get rid of it is to share it with someone else? Well, I have a mental earworm to share with you. Bitter Young Guy from work sent me a link about fox tossing.

Is there a German word for "the feeling you get when something is so ridiculous that you want to laugh, yet is simultaneously jaw-droppingly horrible"? Can we make one up?


I ask, because I recently discovered Fox-Tossing, a 17th/18th century European pastime that is exactly what it sounds like. People would go out in a field and set up a little fenced-in court. Then high-society types would stand, in pairs, holding slack ropes. Then a bunch of foxes would be released into the court. When the foxes ran over the ropes, the players pulled the ropes tight, launching the foxes up into the air. Repeat until all foxes are dead.

My first thought was what’s wrong, can’t they afford horses to chase them like the English? But my ancestors who spoke German were from Lichtenstein, so I guess I don’t have the right DNA to grok German culture.

But to back up a little, yes. You read that right. Fox. Tossing.
“The tossing of foxes and other animals was not without risk to the participants, as it was not uncommon for the terrified animals to turn on the tossers. Wildcats were particularly troublesome; as one writer remarked, they ‘do not give a pleasing kind of sport, for if they cannot bury their claws and teeth in the faces or legs of the tossers, they cling to the tossing-slings for dear life, and it is next to impossible to give one of these animals a skilful toss’.”

And the 17th and 18th century Germans didn't have violent TV/video games/movies to blame it on.

So, please allow me to share this mental earworm so I can rid myself of it and get on with my life.