At our first reenactment of the year, we’ve begun a tradition of toasting left-over Easter Peeps. Sticks can be used, but a bayonet is preferable. 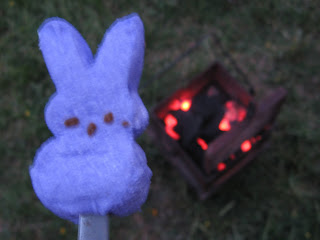 Give the bunny a bayonet clyster!
Carefully toast the bunny while marshmallow gets puffy, golden brown, and the sugar caramelizes. Cool, and enjoy. The cooling part is very, very important. Don’t even try to remove it from the bayonet until it cools. Trust me on this. The spring of 2002 saw a new member toasting a bunny when it caught on fire. Instead of simply blowing out the flames, he waved the stick back and forth. The bunny flew off the end as though it had been launched from a trebuchet. We dubbed that one "Bunny bin Laden". Or maybe it was just a Peep Zombie. Fire definitely killed it dead. 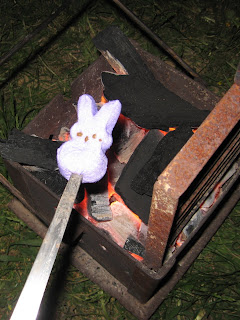 This year we decided to kick it up a notch. All the cool kids are doing stuff with bacon, so I thought to myself, “Self? How about some inside-out pig candy?” 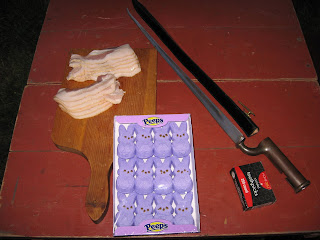 I had packed some left-over bacon in the cooler. Out it came, and half a slice was wrapped around the bunny and skewered with a toothpick. Down over the brazier it went. Sizzle, sizzle, POP! 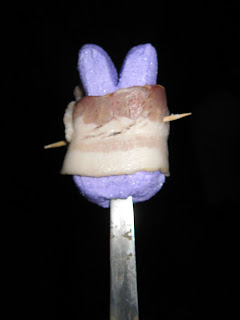 That was grease spattering molten sugar onto my hand where it clung like melted polyester. And then the bunny had the audacity to turn to goo and slide off the bayonet.

Okay – on to Round 2. Double wrap the bunny around the x and y axes. 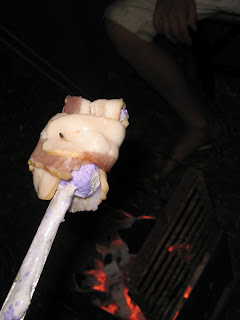 This time we got sizzling, and dripping of grease into the fire, but no spatter. Score! The bunny turned out uber gooey, and the bacon not as crisp as I would have liked, but dang it was surprisingly good. One guy described it as "an amazing confluence of flavors". Inside-out pig candy. Hassenschinkenspeck.

Next time I’ll use a stick – I think the bayonet conducted too much heat, and instead of thick cut bacon, I’ll use the thinnest I can find.

And of course the camera batteries crapped out before the final photo, so no pictures until next time. And there will be a next time ...
Posted by Nancy R. at 9:33 PM

Labels: Recipes, Too much free time